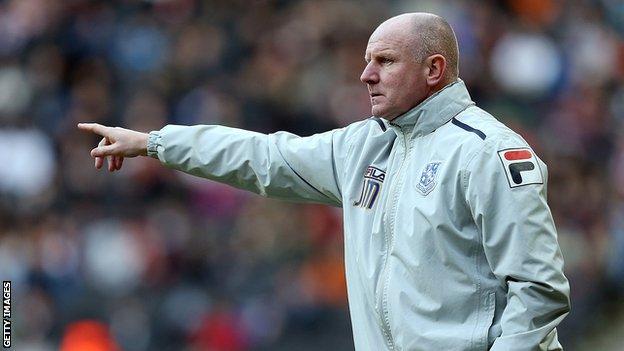 Caretaker manager John McMahon believes Tranmere Rovers can get out of trouble and survive the drop this season.

Rovers fell into the League One relegation zone when they were beaten 2-0 by Brentford on Tuesday.

McMahon told BBC Radio Merseyside: "We are fighting for our lives. We have still got to keep going.

"There is enough in that dressing room with spirit, with fight, with character and the ability to get us out of the hole we are obviously in."

Tranmere next host bottom club Notts County on Saturday, who are five points below them.

"We have got to react and get a valuable three points at home to Notts County," said McMahon, who took charge of Rovers after they suspended boss Ronnie Moore, pending the conclusion of a Football Association investigation into a potential breach of betting rules.

"As long we all stay together, keep sticking together, that is the only way we are going to get out of the situation."

McMahon is likely to have to try and reverse their fortunes without additions to the squad.

He added: "I can only work with the players we have got. We are in a predicament and I can't go out and get seven or eight players.

"That is the type of small squad we have and we have to work with what we have got. Publically criticising players and individuals is not the thing to do.

"We have spoken to the players, we know we can do better, and the same groups of players will have to go out on Saturday and try and get us the three points."