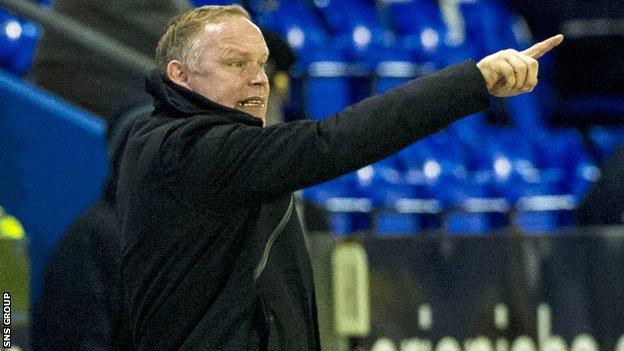 Inverness boss John Hughes was pleased with a clean sheet and a clean bill of health following a drab draw with Hibs.

"We had to stop the bleeding and get a bit of confidence back," Hughes told BBC Radio Scotland.

"The shape of the team looked good. One or two players needed that other game and hopefully they're all unscathed."

In a game of few goalmouth incidents, Aaron Doran was the liveliest player in the home side, going close with a shot in the first half and drawing a good save from Ben Williams after the interval.

It wasn't the greatest game in the world, to be honest, but I felt we could have stolen it

The Irishman was withdrawn on 78 minutes as a precaution against injury.

"Aaron picked up a wee bit of a tweak but should be okay and if that's the case then I'm a happy man," added Hughes, who is still to decide on his starting XI for the Highland club's first major cup final.

Greg Tansey, Marley Watkins and Ross Draper will all return from suspension for Sunday's trip to Celtic Park, while Graeme Shinnie, James Vincent and David Raven were rested against Hibs.

"The team's not picked yet, there's still food for thought," explained Hughes.

"I thought Nicky Ross was really good, doing the brave thing and getting on the ball.

"Now we need to make sure everyone is rested and ready to go on Sunday.

"We're looking forward to it. The final is about playing the game, not the occasion, but they need to make sure they know something special is happening."

Hughes admitted the game against his former club was far from a thrilling spectacle but will be content to leapfrog Dundee United into fourth place in the Premiership.

"It wasn't the greatest game in the world, to be honest, but I felt we could have stolen it," he said.

"Aaron Doran has drawn a good save from the goalkeeper and there were two chances in the first half that just went past the post.

"The overhead conditions were a bit blustery and it was a difficult surface."

Hughes was also pleased with the contribution of his late substitutes and believes both youngsters will be pressing for regular first-team places soon.

"We all know the quality Ryan Christie has," he said. "He's not just a good dribbler; he sees a pass and that excites me.

"It takes all kinds of players to build a team, but he's the one that's got that something special that can unlock the door.

"And don't forget Adam Evans - the last time he got on against Aberdeen he was that hyped up that I think he forgot to breathe.

"We've got high hopes for them."