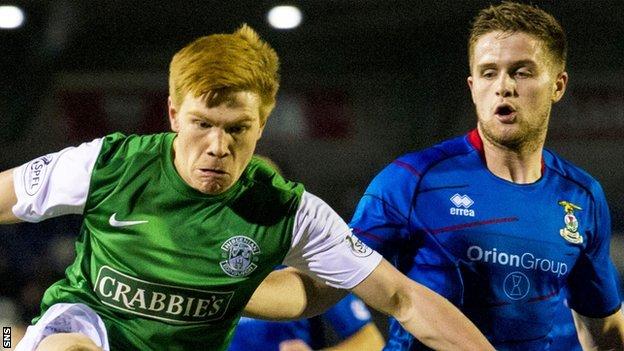 Duncan Watmore's return from injury was the only positive Hibernian manager Terry Butcher could muster after a 0-0 draw away to Inverness Caley Thistle.

"The only highlight for us was Duncan Watmore's performance," Butcher told BBC Scotland.

"He only lasted about 60-70 minutes, but he'll get better and stronger - he's just back from injury. So that's exciting."

We had the Good, the Bad and Ugly on Saturday, while tonight was a black and white movie that's been consigned to the rubbish bin

"Sam Stanton buzzed about as he normally does, but the rest was not a lot to write home about," he said.

With St Johnstone winning 1-0 away to Dundee United, Hibs have slipped four points behind the Perth side in the race for sixth spot in the Premiership.

"We didn't offer enough going forward. Defensively, we were strong, which was fine, but we've got to do better up the other end of the pitch.

"On Saturday, it was a very adventurous and attack-minded team, but this was the complete opposite."

The goalless draw followed a six-goal thriller at home to Motherwell that also only added a point to Hibs' points tally.

"We had the Good, the Bad and Ugly on Saturday, while tonight was a black and white movie that's been consigned to the rubbish bin," added Butcher.

"It's our first clean sheet of 2014, but no goals up front is back to what it was before.

"We don't seem to get things right at both ends in one game."