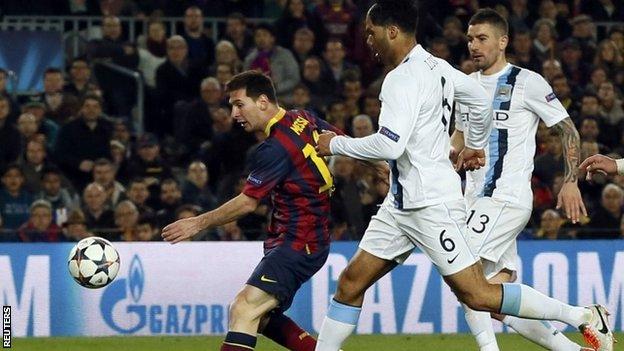 Former Manchester City defender Danny Mills believes the club need to "spend big" on defenders if they are to compete at the top level.

City were knocked out of the Champions League by Barcelona thanks in part to defensive errors from Martin Demichelis and Joleon Lescott.

"Every City player is top drawer apart from the centre-half that plays alongside Vincent Kompany," said Mills.

"They have all the money in the world but have not bought the right player."

Demichelis, a £4.2m summer signing, conceded a penalty and was sent off in the first leg before Lescott, who cost the club £22m in 2009, was dispossessed by Lionel Messi to open the scoring in Spain. City lost 4-1 on aggregate.

This came after Demichelis also conceded a penalty on Sunday as City were knocked out of the FA Cup by Championship side Wigan Athletic.

Mills, speaking as a BBC Radio 5 live pundit, added: "City should have gone out and spent £20m on a quality centre-half, not the £4m they spent on Martin Demichelis.

"You need to pay for quality. They should have spent big, they knew they had big important games coming up but they did not address it."

City were expected to sign Porto defender Eliaquim Mangala on deadline day in January but the move did not materialise.

"City have done well but Martin Demichelis cost them in the first match and tonight it was Joleon Lescott. They are just not good enough at this level and City need to address that in the summer," added former England international Mills, who played for City between 2004 and 2009.

"They are just not Champions League players. Lescott was lucky in the first half and he always has a mistake in him."