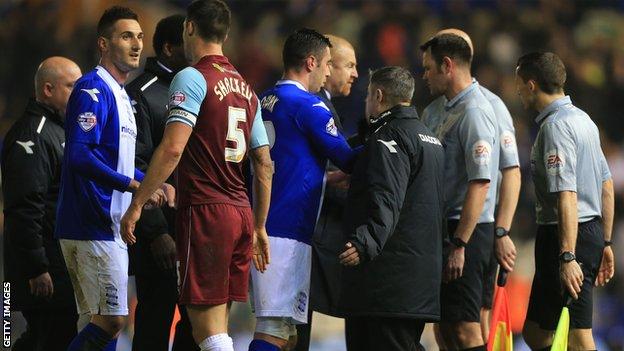 Robinson was booked for protesting after Michael Duff had put Burnley 2-1 up midway through the second half.

I am not questioning his performance, but he knows what he said and it is not acceptable in any walk of life.

Clark told BBC Radio 5 live: "The referee rubbed my captain's nose in the fact that we were losing the game.

"That is unacceptable behaviour from an official and I will be wanting to take it further. He mocked him."

Burnley were furious at the manner of Birmingham's late equaliser, claiming Manchester United loanee Federico Macheda had handled when scoring. They also claimed that there had been a foul in the build-up to the goal.

But Clark, who celebrated Macheda's strike by kicking the advertising boards, said Linington had made "debateable" decisions during the match that affected both sides.

"Referees will make errors, I accept that, but I'm more concerned with the way the referee spoke to my captain when he booked him," said Clark.

"We felt there was a foul when Burnley scored their second. When Paul Robinson protested, the referee mocked him about the scoreline."

Clark, who said he would report Linington, added: "There was a lot of arrogance from the officials. I was furious and I lost my temper.

"I am not questioning his performance, but he knows what he said and it is not acceptable in any walk of life."

The draw at St Andrew's leaves Birmingham without a home win in 13 league games, while Burnley are second in the Championship, eight points clear of third-placed Derby.