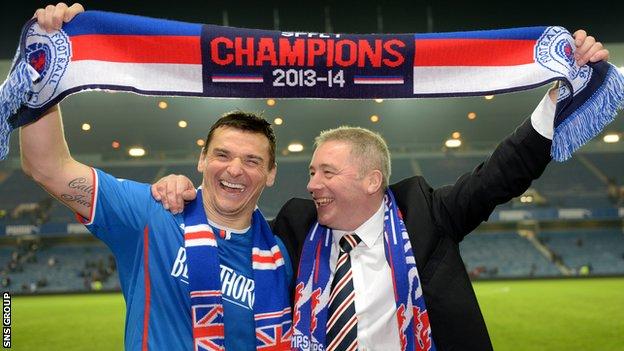 Manager Ally McCoist heaped praise on his players after Rangers became League One champions with eight games of the campaign still remaining.

"I think 26 wins and two draws is a great achievement," said McCoist after the 3-0 success over Airdrie.

"The players deserve an enormous amount of credit, as do the supporters."

Captain and centre-half Lee McCulloch scored his third hat-trick of the season as Airdrieonians were swept aside in the first half at Ibrox.

The 35-year-old converted two penalties and tucked away a low shot from a Nicky Law pass in the 41st minute to take his tally for the season to 17 goals.

"I actually scored a quicker hat-trick in Vladikavkaz in a Champions League match than the time Lee scored in tonight, but I wasn't playing centre-half to be fair," said former Rangers striker McCoist.

"I think the last person to do it here was Paul Gascoigne on the day we won the title against Aberdeen, although I draw the line at saying they were similar players."

He added: "McCulloch epitomises the spirit that has been required within the club at the beginning of the journey back.

"I'm absolutely thrilled for him. For a captain to score a hat-trick from centre-half on a title-winning day is real 'Roy or the Rovers' stuff."

Rangers are attempting to reclaim their place in the top flight after a torrid few years off the pitch.

They were placed in the bottom rung of Scottish league football after lapsing into administration and then liquidation in 2012.

It is great win for the manager, to repay the faith he has shown in some of the boys

They will play in the Championship next season, one title win away from the Scottish Premiership,

"These are stages in our recovery which must be met, so I think it is only fair that they should be celebrated as you would winning any league," added McCoist.

McCulloch said he wanted Rangers to maintain their unbeaten run.

"It is 28 games, drawn two and won 26, that's a fantastic record and we want to keep it going," said the former Motherwell and Wigan player.

McCulloch was also pleased for McCoist, who came in for heavy criticism after Rangers drew 1-1 with Albion Rovers in their Scottish Cup quarter-final clash on Sunday.

"It is great win for the manager, to repay the faith he has shown in some of the boys, by getting his second league title," said McCulloch.

"He has had to deal with things that some managers have never dealt with, even those who have been in their jobs for 20-25 years."