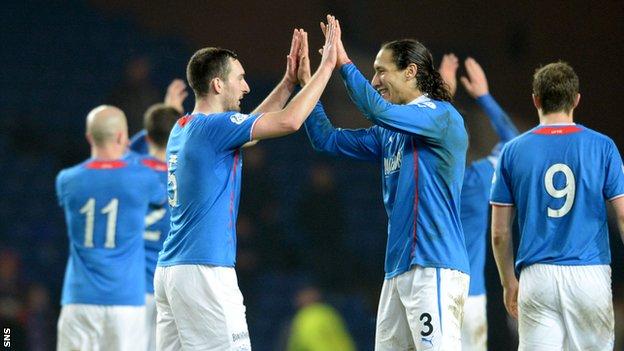 Rangers may not receive the credit they deserve for climbing the leagues, according to former captain David Weir.

Ally McCoist's side secured the League One title with Wednesday's victory over Airdrie at Ibrox, with captain Lee McCulloch firing a hat-trick.

And Weir told BBC Radio 5 live: "There are no easy leagues to win. Even winning the leagues they're in now takes a bit of doing.

"Perhaps Rangers haven't had the credit they deserve for that."

There are no easy leagues to win. Even winning the leagues they're in now takes a bit of doing.

The Ibrox club can look forward to life in the Championship next season, having secured the title with eight league games of the campaign remaining.

McCoist's men have amassed 26 wins and two draws without a league defeat during the current campaign.

Weir, who moved from Everton to the club he supported as a boy in 2007 and helped them win three league titles, two Scottish Cups and three League Cups, praised McCulloch.

"Lee McCulloch was there playing in the Champions League games, then all of a sudden, he's playing in the bottom tier of the Scottish League," said the former defender.

"So, it seemed like a long way back for a lot of players and Lee was one who stuck there. Now he can see light at the end of the tunnel.

"That's great for him and the club."

With Rangers at least another season away from a return to the top flight, Weir said Scottish football would benefit from the return of Old Firm derbies.

"I think Scottish football in general misses them, the world misses it," he said.

"There's not many games like that: Rangers v Celtic. Anyone who has been to one or has been fortunate enough to play in one realises how special they are.

"That's a big miss for everyone and the sooner we get back to that the better."

McCoist described 26 league victories and two draws this season as a "great achievement".

"The players deserve an enormous amount of credit, as do the supporters," added the Rangers boss.