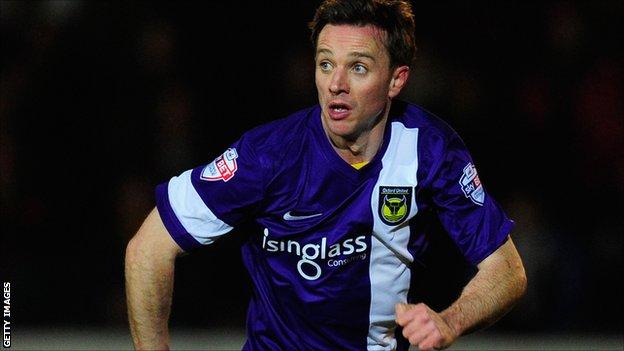 David Connolly is hoping to complete a full set of Football League promotions with Oxford United this season.

I've had promotion through every division apart from this one as it is the first season I've played in League Two. So that would be nice obviously

"To sprinkle a little bit of magic everywhere you go, that would be nice," Connolly told BBC Radio Oxford.

"Obviously there is a long way to go. You can go a whole career and not win promotion or a medal, so it's not easy. It's not a given, and there will be plenty of twists and turns.

"You want to be part of any success. I've had promotion through every division apart from this one as it is the first season I've played in League Two. So that would be nice obviously.

"There are teams with big budgets who have spent a lot of money and we are up there competing with them and there is no reason why we can't. We are as big a club as the others so it will be a good test for us."

Connolly won promotion from League One and the Championship with Southampton in 2011 and 2012, as well as promotion to the Premier League with Sunderland in 2007.

He joined the U's in January and has scored three times in nine games as Oxford prepare to visit leaders Chesterfield on Saturday.

And despite the fact he will turn 37 in the close season, the former West Ham, Leicester, Wigan, Sunderland and Southampton striker says he has no plans to retire.

"I still want to play for a few years," he said.

"I've got another year left at Portsmouth. I don't think it's case of savouring it. It's my work, it's a job and something I'll keep doing until I've had enough.