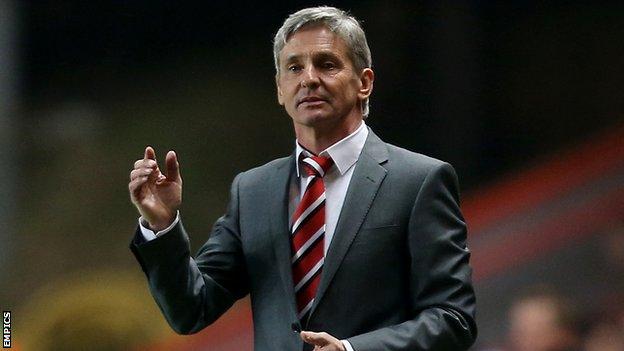 Charlton Athletic head coach Jose Riga is undaunted by the task of trying to keep the club in the Championship after replacing Chris Powell.

The 56-year-old was appointed on Tuesday when new Addicks owner Roland Duchatelet dismissed Powell, who had been in charge since January 2011.

Riga told BBC London 94.9: "For me what happens is the story of football.

"I have a lot of respect for the ex-manager. I am here for Charlton, not for me."

Powell had been in talks over a new contract with Duchatelet, the Belgian businessman who completed his takeover of the Championship club in early January.

But Duchatelet, who also owns Belgian side Standard Liege and has links to four other European clubs, said they "could not reach an agreement over the club's football strategy going forward".

Powell, 44, had three separate spells as a player at Charlton and after being given the manager's job, led the south-east London club to the League One title in 2012.

New boss Riga, who has previously worked with Duchatelet at Standard, has spent all of his management career in Belgium, but has also worked in Qatar and has joined Charlton from AC Milan's youth academy.

He took charge for the first time on Wednesday and saw his new side draw 0-0 at home to Huddersfield Town.

"My respect goes now to the people of Charlton - all the people that I met in the last two days," Riga said.

"All the employees give me a very good welcome and I am happy with the situation."

With the team spirit and qualities, to be able to be more efficient comes with confidence and results. I think we can do something

The draw with Huddersfield saw the Addicks remain bottom of the Championship and three points from safety, but they have three games in hand on fellow strugglers Yeovil and Barnsley and have played four games fewer than Millwall, who are 21st in the table.

Riga saw enough potential in the display against the Terriers to be optimistic of survival.

"I don't want to speak too early, but that is our objective and goal," he said.

"We do not have to start from zero. Even though we don't win this game it is a good first step.

"With the team spirit and qualities, to be able to be more efficient comes with confidence and results. I think we can do something.

"I like the way they try and the team spirit. The mindset was very good. The fans gave me a very big reaction. With the fans we can do something great."