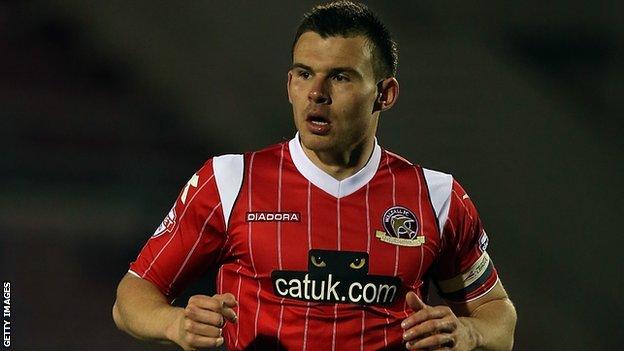 Walsall captain Andy Butler says fans must keep believing they can challenge for promotion, and that complaining from the stands will not help.

The Saddlers have not won in eight games following Tuesday's 1-1 draw with Crewe and are eighth in League One, seven points outside a play-off place.

"The fans have to keep believing and not get frustrated," he told BBC WM.

"Against Crewe there was a lot of moaning I thought, if you're positive the players become more positive."

Walsall's point against the Alex on Tuesday did stop a run of four successive defeats, but was only their third point out of the last available 24.

Butler acknowledged the supporters have not had much to cheer in that time, but is adamant the picture is not that bad and wants fans to stay with the team.

"I know it's more difficult when you're losing, but the more encouragement they give us, the more things the lads try," Butler said.

"We've been playing well but it's just been the rub of the green - we've had a couple of decisions go against us."

Walsall's home form has been a problem all season with only six wins coming at the Banks's Stadium.

The last of those was against Oldham in mid-January but the club's six away victories have kept them on the fringes of the play-offs.

"I'm confident we'll still be there. I don't think confidence has been shaken that much," said Butler.

"We enjoy playing our football, I just don't think results have gone for us.

"Whoever makes the most consistent run now is going to be in it. It's all to play for.

"Any ground when it's full, there's a buzz about it. Why not have a buzz at the Banks's?"