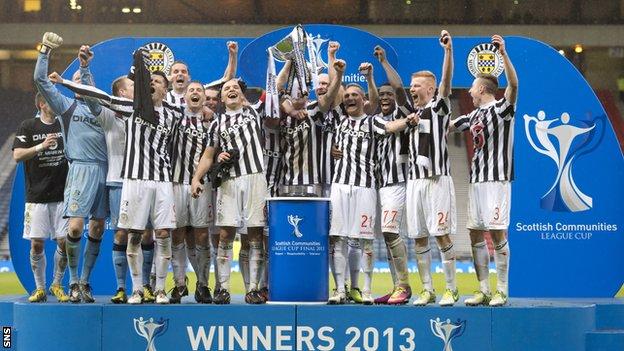 Danny Lennon admits to "a little envy" ahead of Sunday's League Cup final but the St Mirren boss has no time to reflect on last year's success.

Twelve months on from their Hampden win over Hearts, the Paisley side are locked in a tight contest to avoid the relegation play-off place.

"Looking back, it's been a very quick year; a real rollercoaster ride since that great day," said Lennon.

"But managers aren't judged on the past, my focus is on the here and now."

We always seem to be at our best when everyone is writing us off, so long may that continue

Just four points separate four teams in the scrap to avoid finishing the Premiership in 11th place, with St Mirren a point better off than Ross County and Partick Thistle - and three behind Kilmarnock, who have played a game more.

"Winning the Cup was fantastic but, as a manager, I know it's important not to dwell on the past," Lennon added.

"It's a great memory for us and one we will always cherish.

"But right now we want to pick up as many points as we can in the last five games before the split and get us up that table."

Saints have a very tough run-in, with five games against top-six opposition. Lennon's men take on Dundee United at Tannadice on Saturday before meetings with Celtic, St Johnstone, Inverness and Motherwell.

However, the Buddies boss, who is out of contract in July, is confident his side can negotiate their way out of trouble.

"Our destiny is on our own hands," he said. "We are where we are. We will focus on building on the positive result we got against Kilmarnock last week.

"We are facing an in-form Dundee United side but no-one gave us a chance against them on Boxing Day when they had just won six straight games. We got a 4-1 win that day and we'll look to do the same again.

"I believe that if you take Celtic out of this league, you can look at all the other teams as being compared similarly.

"What these top-six clubs have done is be more consistent than the sides in the bottom half of the table.

"But on the day anything can happen.

"We always seem to be at our best when everyone is writing us off, so long may that continue."