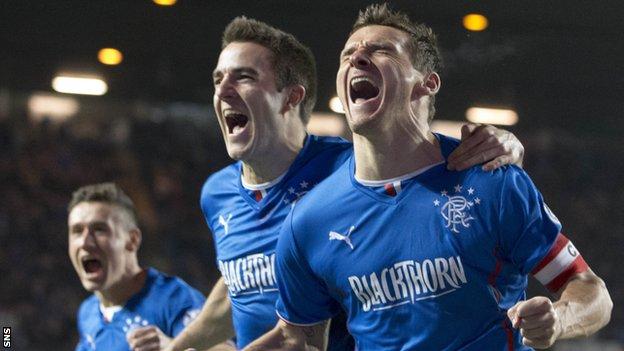 Rangers remain caught between where their past has left them and where they want to be.

Winning League One ought to be recognised as an achievement in its own right.

And the team's record of 26 victories and two draws from 28 games is an impressive accumulation of points and command. Even so, it is a success that needs to be viewed in the context of the bigger picture and its smaller details.

The League One title seems smaller and less worthy of triumph when compared to the top-flight championship - which is what Rangers are used to competing for and are intent on eventually challenging for again.

But this success should be judged on the basis of the efforts of the players to maintain their consistency, and their relatively untroubled progress through the campaign, even if performances have sometimes lacked the dominant swagger that Rangers were expected to hold over part-time opponents.

The Ibrox side's wage bill is, after all, the second largest in Scotland behind Celtic's.

The club had an opportunity to rebuild and regroup in the lower leagues, but the chaos of the boardroom led to short-term decision making and this continues to hold the team back

So, why does some discontent linger amongst the fans?

Supporters react emotionally to events, and there has been a run of flat and featureless performances in recent weeks, culminating in the 1-1 draw with Albion Rovers in the Scottish Cup quarter-final at Ibrox, a game in which Rangers were desperately chasing an equaliser into the final stages.

The team has seemed, at times, to be performing out of repetition rather than enterprise, in part because they have always eventually found a way to win.

An unconscious assumption might have settled amongst the players that the victories will always come, and opponents generally tend to try to stifle the life out of games.

The way that Rangers swept Airdrie aside on Wednesday night to clinch the title - in a display full of energy, high tempo and aggressive ambition - should have been typical of Ally McCoist's side this season. Instead, it was an exception.

Form can fluctuate, but the sense remains of a club that is not performing to its full potential. The team needs more quality, and the squad needs more variety, yet there is no scouting set-up at a time when recruitment plans for next season should be starting to be implemented.

The youth academy was recently awarded the maximum six-star status by the Scottish Football Association, but the number of young players in the first team has decreased this season, with only Lewis Macleod, before injury, and Fraser Aird establishing themselves in the starting line-up.

McCoist, rightly, would point out that experience is worthy, too, and perhaps the likes of Robbie Crawford, Barrie McKay and Luca Gasparotto are not yet ready for prolonged exposure to the demands and the expectations of being a Rangers player.

They are likely to receive more opportunities now that the title has been won, but the approach of the management team will be that they need to earn their place, and then play well enough to retain it. Youth alone is not a reason for selection; the players also need to be able to hold their own.

What holds Rangers back from a sense of optimism is anxiety about the future. Will this squad have enough depth and variety to challenge for the Championship title? Will the ownership structure and boardroom turmoil finally be resolved?

In truth, the former can only be addressed once the latter has been. Rangers' progress on the field - the team could yet reach the Scottish Cup semi-finals and will contest the Ramsdens Cup final against Raith Rovers next month - is regularly overshadowed by events off the pitch.

Dave King, the former Ibrox director, has spent two days meeting shareholders in London, and will do the same with the leading fan groups on Friday.

The immediate future for the club is cost-cutting and temporary financial fixes - such as the £1.5m to be borrowed from the shareholders Sandy Easdale and Laxey Partners - but King wants to lead a new round of fundraising to allow investment in the club ahead of its challenge to return to the top flight.

He has become a figurehead for change amongst the support.

This backdrop, of intrigue and machinations, inevitably influences the mood of the fans. King has advised supporters to put their season ticket money into a trust, and then demand certain assurances from the directors about how the club will be run and funded.

A conflict could ensue, between shareholders, directors and supporters, and so there is no certainty about how this team will evolve.

It is doubt that continues to surround Rangers. The club had an opportunity to rebuild and regroup in the lower leagues, but the chaos of the boardroom led to short-term decision making and this continues to hold the team back.

McCoist and his players deserve credit for achieving what was demanded of them; the lingering dismay of fans can be understood, too. The club was built in the pursuit of higher glories, but perspective is required for now.

There are improvements that need to be made, to the squad, to the team, to other aspects of the football department, but they will only come when there is stability in the boardroom.

Rangers remain some distance from where they want to be.