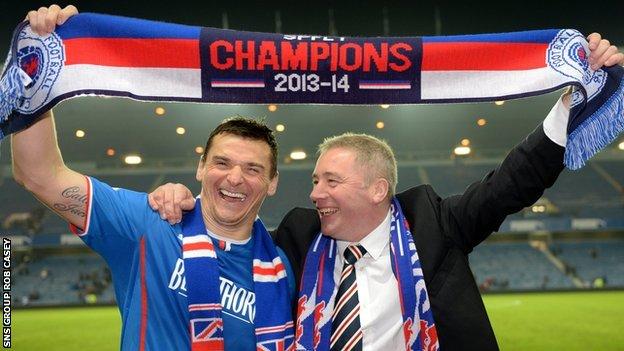 As 40,000 jubilant Rangers fans danced out of Ibrox on Wednesday and into the frosty Glasgow evening, the club's manager was deep in the bowels of the stadium telling the media that the latest title win should be celebrated just like any other from the past.

Having wrapped up the Scottish League One crown in record time with yet another emphatic win, Ally McCoist may well have had reason to be cheerful.

But when the trophy takes its place beside last year's silverware in a packed cabinet, its significance will be difficult to ignore.

History will view it as a marker, highlighting the completion of stage two in a three-stage process.

If the Glasgow club follow up their latest title win with another next season, they will find themselves back at the top of the Scottish game and back with the clubs who voted to consign them to the lower leagues after cataclysmic mismanagement led to administration and liquidation in 2012.

The closer Rangers get to that goal, however, the more questions will be asked about how prepared they are to meet the challenges that lie ahead.

Despite being offered numerous reasons not to show up, the supporters have remained loyal, with more than 38,000 owning season tickets.

That said, there have been grumblings about the standard of the football on show.

The current squad may have been good enough to skip through the lower leagues, but is it good enough to ensure Rangers keep on winning in both the Championship and Premiership?

McCoist has already made noises about the need to strengthen.

Players such as Jon Daly and David Templeton, who made the switch from the top tier to be part of the club's rise back up the leagues, will help but the manager wants more.

That will cost money, though. And this is where it gets tricky.

The current wage bill for players has already been the subject of much controversy. Just how much has been spent is not clear but it is fair to say it dwarfs that of their rivals.

And the fact remains that the club, which has stumbled from one financial disaster to the next over the past few years, is still struggling to balance the books or offer any certainty to investors, sponsors or fans.

So what has gone wrong?

The 2012 administration allowed the debt slate to be wiped clean but what followed was a bitter fight for control and accusations of more mismanagement.

A share issue raised £22m just over a year ago but the club announced recently that nothing is left in the pot - although it has denied suggestions that it is on course for administration yet again.

Still, the recent need for emergency loans from major investors has done little to settle the nerves in the stands or in the City, where the share price has plummeted.

Now former club director Dave King wants fans to avoid giving any more cash to the current regime and instead has asked them to put money they have set aside for season tickets into a separate account from which cash can be distributed in instalments when needed.

Why? Because he does not think the current board can be trusted to spend the money properly.

It seems a vocal band of supporters agree with that view and want King to spearhead a new takeover.

If he does, he would be the latest in a long list of recent claimants to the Ibrox throne.

After Sir David Murray sold the club to Craig Whyte for £1 in 2011, administration and liquidation followed soon after.

A group of investors led by former Sheffield United chief executive Charles Green then bought the assets and attempted to rebuild the club from the bottom of the Scottish leagues.

Green walked away after allegations he had links to Whyte, while Whyte claimed he was the rightful owner and had been duped by Green.

As fans screamed out for clarification and stability, the boardroom battles continued as shares were traded between faceless City institutions vying for a larger slice of the pie but not outright control.

Today, the largest shareholder is Global investment firm Laxey Partners, which has acquired almost 13% of the club.

On the field, few would bet against Rangers battling their way through the Scottish Championship and reaching the top tier again.

Off the field, yet another battle is looming and only a fool would predict the outcome of that.