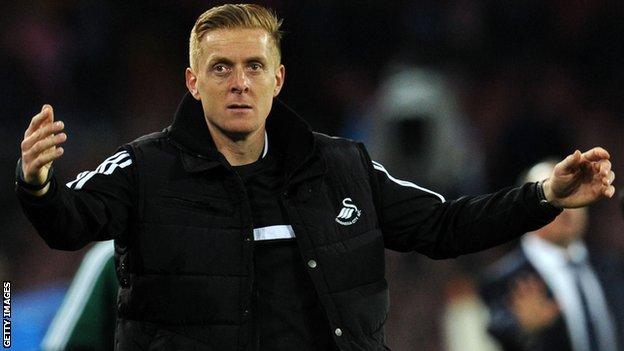 The ex-Netherlands defender will leave Feyenoord at the end of the season and his agent confirmed he has approached Swansea on Koeman's behalf.

"When you do have a change in manager names will always come up," he said.

Koeman, who played alongside Laudrup at Barcelona, announced in February he will leave Feyenoord at the end of the season.

The 50-year-old's agent Guido Albers says he got in touch with Swansea's Netherlands-based director John van Zweden, who advised him who to contact at the Welsh club.

He said he sent an email to chairman Huw Jenkins and vice-chairman Leigh Dineen regarding Koeman, but has had no response.

However, a senior source at Swansea says the Premier League club are not interested in speaking to Koeman.

Monk said he accepted there would be speculation regarding the manager's role at Swansea given the fact he was appointed on an interim basis.

"This is the business we're in. If you're a player, coach or manager you'll have players linked every single minute, especially at this level. It's the way it is in the world," Monk added.

"If people want to link, left right and centre, other people's names that just shows you everyone wants to manage in this league."

Monk says striker Michu has trained most of week and the Spaniard could face West Brom at the Liberty Stadium on Saturday.

Michu has been sidelined since having ankle surgery at the end of December and last featured for the Swans in the 1-1 draw at Norwich City on 15 December.

"With Michu what we've been doing is just assessing every day so we see how he feel after training which dictates what we do with him next day.

"We're kind of tailoring training to suit him. He's done most of the sessions for the week and he's been great.

"He trained today [Thursday] and looked very sharp. Obviously match fitness wise he isn't going to be where he should be.

"But we'll see him tomorrow [Friday] and make a judgement on him then."

Winger Pablo Hernandez has recovered from a hamstring injury but midfielder Jonjo Shelvey is still struggling with a hamstring problem.