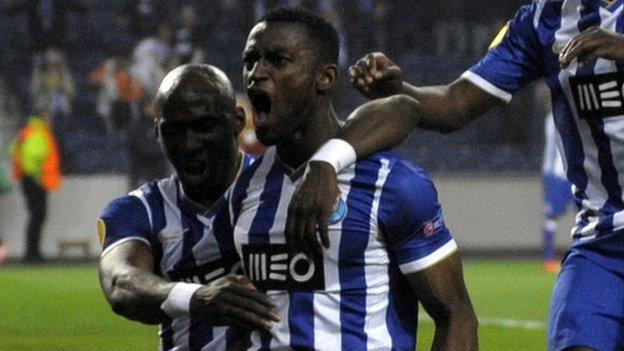 Jackson Martinez's second-half goal earned managerless Porto a 1-0 win over Rafael Benitez's Napoli in the last 16 of the Europa League.

The Colombian striker pounced as Napoli failed to clear a corner and his shot was deflected past Pepe Reina.

Valencia beat Ludogorets 3-0 in Bulgaria despite having Seydou Keitasent off after just 24 minutes.

Elsewhere, Lyon came from a goal down to beat Viktoria Plzen 4-1 thanks to two goals from defensive midfielder Gueida Fofana.

Plzen were ahead after just three minutes through Tomas Horava before Fofana equalised nine minutes later.

Second-half goals from Alexandre Lacazette, Arnold Mvuemba and a second from Fofana means the French side travel to the Czech Republic as favourites to progress.

A goal from Mario Gomez 11 minutes from time earned Fiorentina a 1-1 draw at Juventus, after Arturo Vidalhad opened the scoring, while in the all-Spanish tie Real Betis ran out 2-0 winners away at Sevilla thanks to a goal in each half fromLeo Baptistao and the ironically named Salvador Sevilla.