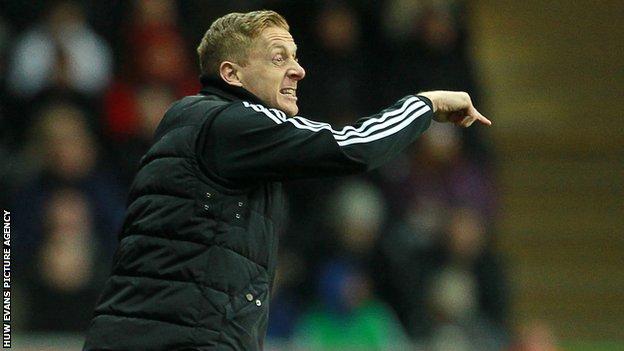 The Swans are four points clear of the relegation zone while West Brom are only out of the bottom three on goal difference.

West Brom have failed to win a match since Pepe Mel's appointment in January.

"You get defining games throughout season and this is definitely one of them," Monk said.

"Everyone's fighting for different reasons throughout the league. We want the three points and so do West Brom.

"It's a good game, a big game, but we're in front of our home fans and it is important that we put on a performance to get the win."

Saturday's game at the Liberty Stadium will be Monk's eighth game in charge of the Swans since he replaced Michael Laudrup in February.

Swansea have only won one of the four Premier League games in which Monk has been at the helm, but the head coach has been pleased with his side's performances.

"We deserved a hell of a lot more than what we've got," Monk added.

"When I look at the Premier League games we've had, we beat Cardiff 3-0, went to Stoke where we managed to get a point and could have even got three points.

"We had a very good game against Liverpool away, scored three goals and came away with nothing.

"Then Crystal Palace here in the last game - a very good 45 minutes but the second half was very difficult for us."

Swansea resume their Premier League campaign after a two-week break against a West Brom side yet to win in the seven league matches under former Real Betis boss Mel.

Mel's future is in the balance but the Baggies would move within a point of Swansea with victory at the Liberty Stadium on Saturday.

"They're under pressure at the wrong end of the league in terms of where they want to be," Monk said.

"In recent seasons they've been finishing in the top half of the table so I think it's been a bit of a surprise to them.