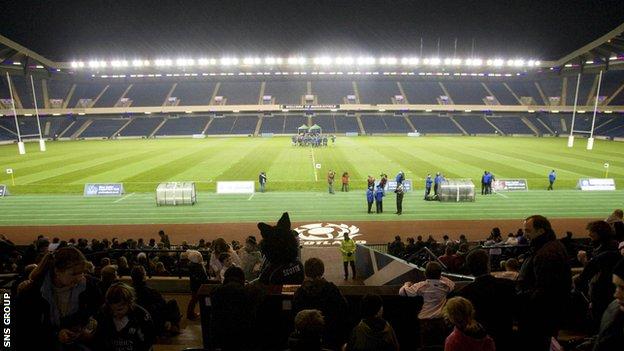 Celtic have confirmed that they will play at Murrayfield should they reach the Champions League qualifiers.

With Celtic Park and Hampden being used for the Commonwealth Games, the home of Scottish rugby is the "obvious choice", says chief executive Peter Lawwell.

Celtic are 21 points clear as they bid for a third successive title.

This season, Celtic won three Champions League qualifying rounds to reach the group stages of the competition for the second year running.

Edinburgh's Murrayfield, which has a capacity of 67,000, will also have a new hybrid grass pitch by July when the second qualifying round gets under way.

"Clearly we very much hope to be involved in the Champions League qualifying matches in July and early August and if this is the case then we felt it important that our fans know our proposed arrangements as early as possible," added Lawwell.

"We are fortunate that we have such a fantastic and sizeable support and clearly it is important that we allow as many fans as possible to attend our matches.

"Murrayfield is a magnificent stadium and we are sure it will be a venue which will provide a great footballing occasion."

Any request by Celtic to play outside Scotland would have been denied by European governing body Uefa.

Their rules state that Champions League matches must be played "either at the ground of the home club or at another ground in the same or another city within the territory of its association".

Murrayfield, which hosts Edinburgh's home games in the Pro12 and Heineken Cup as well as internationals, has previously been used as a football venue.

Hearts used the stadium for European home ties between 2004 and 2006 as their Tynecastle pitch was deemed too small for Uefa club competition.

"Scottish Rugby is proud of the facilities we have on offer in Edinburgh. This is a fantastic opportunity for Celtic to work with us to promote Murrayfield as a venue not just for rugby, in 2014."