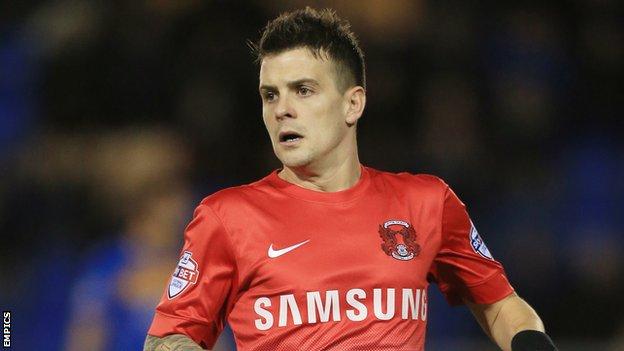 Winger Dean Cox says Leyton Orient are determined to seal a top-two place in League One as they prepare to host automatic promotion rivals Brentford.

Third-placed Bees, who travel to Orient on Saturday, lie one point behind the O's but have played two fewer games.

"We have put ourselves in a great position and want to make sure we get the job done," he told BBC London 94.9.

"We know play-offs are close [to being] in the bag, so to speak, but we are aiming higher then that."

If you look at the three sides, I would say Wolves have a few more stand out players. Man-for-man between us and Brentford, I would probably have my side

He added: "If Brentford were to win their two games in hand we would go to third but we will continue as we are and see where it takes us."

Orient were the early pace-setters in the third tier, beginning the campaign with a club-record eight successive victories, but across the capital Brentford have recovered from a slow start to the season to become promotion contenders on the back of a recent 19-match unbeaten run.

With Wolves surging to the top of the league, thanks to their own club-record of nine consecutive wins, one side will have to miss out on the top two.

Leyton Orient welcome both sides to the Matchroom Stadium before the end of the season, with Brentford the visitors on Saturday lunchtime.

"We are trying to play it down a bit but we know the importance of it, with us both being up there for automatic," 26-year-old Cox added.

"It might give us help in the psychological battle if we were to go and win, and force them to have a blip.

"I think Wolves were the favourites at the start of the season and they have proven that with their run of straight wins. With them doing that it will be very difficult but we have stayed in there."

Orient are the top scorers in the division and Cox believes the squad put together by manager Russell Slade can rival almost any other in League One.

"If you look at the three sides, I would say Wolves have a few more stand-out players," Cox said.

"Man-for-man between us and Brentford, I would probably have my side. Brentford have got a bigger budget and are able to bring in a few loans.

"They have brought in the players but you have got to fit them into the squad and the team and play a certain way. They have done fantastically well.

"The signings we have brought in have been on frees.

"That is credit to the gaffer [Slade] to assemble a side which is in the promotion race. To do that with no money is a fantastic achievement."