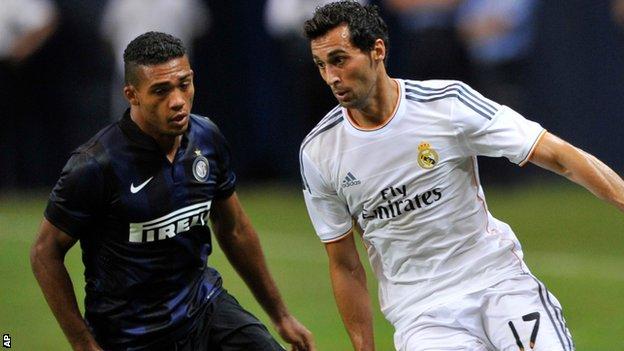 Spain defender Alvaro Arbeloa faces a race to be fit for this summer's World Cup after being ruled out for "six to eight weeks" with a knee injury.

The Real Madrid right-back, 31, is a regular starter for Vicente Del Bosque's world and European champions.

He was left out of the latest squad after injuring his right knee against rivals Atletico Madrid on 2 March.

"It is worse than first thought but if everything goes well, I'll be out for six-to-eight weeks," said Arbeloa.

"Hopefully I'll be back in time to play in the Champions League final if Real make it and the World Cup if I'm picked."

The ex-Liverpool player, who moved to the Bernabeu in 2009, has made 28 appearances for Spanish leaders Real this season.

But he will now miss the majority of the La Liga run-in, as Carlo Ancelotti's men compete with Atletico and Barcelona in a tight three-way battle for the title.

The Spanish domestic season concludes on 17-18 May, while Spain open their World Cup campaign against Netherlands on 13 June.