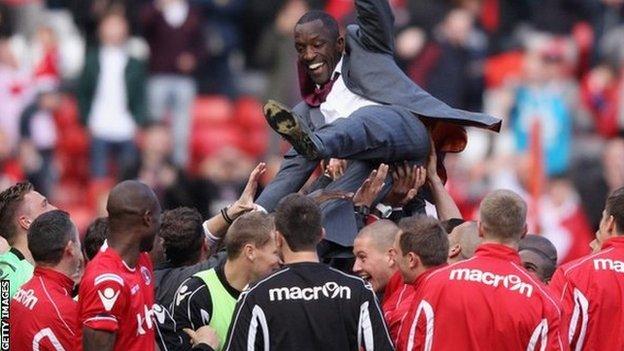 Former Charlton manager Chris Powell is "confident" he would have kept the club up this season.

The 44-year-old was sacked on Tuesday and replaced by Belgian Jose Riga.

A statement issued on his behalf by the League Managers' Association said: "It is with deepest regret that my time as manager has now come to an end. It was an honour to manage the club.

"I was confident that we would have secured our Championship status once again this campaign."

Powell led the Addicks to the League One title in 2012 and ninth place in the Championship last season.

"I always said I would never walk away from this great club," he continued. "Ultimately it's not about individuals, it's about the club and our fantastic supporters.

"I have over 15 years association with Charlton dating back to 1998 and, over the years, I have enjoyed many truly wonderful times.

"I want to wish everyone connected with Charlton Athletic the very best for the future."