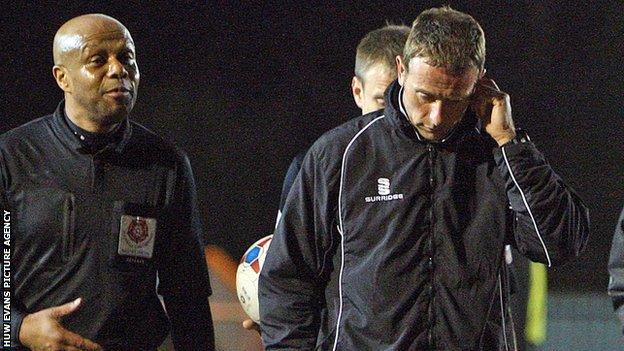 Barr criticised his side's performance at Braintree before offering an apology to the travelling support ahead of Saturday's Conference Premier game at Grimsby.

"Our fans that travel everywhere with us deserve more than they [saw] on Tuesday night," said Barr.

"My heart goes out to them."

Barr added: "There were a few choice words from some of them, and they're entitled to that.

"What they've seen isn't good enough or what they've come to expect from a Wrexham team that's been there for two seasons."

Wrexham, who travel to Grimsby on Saturday are 10 points off the Conference Premier play-off places.

Barr, in temporary charge following Andy Morrell's departure, warned his players that if they continue to perform poorly their positions at the club will be at risk.

"I think at the moment the players can't lift themselves. They've shown that," Barr added.

"The fight and desire... was non-existent. That's something we need to remedy."

"They're honest enough. They know they can't perform like that. It's detrimental to their careers."

But the Wrexham manager was able to find some one positive in the Braintree Town defeat through the debut performance of youth team player Danny Reynolds.

"A 16-year-old boy getting thrown into it, a baptism of fire. He was unlucky with his header that hit the bar.

"On another day it could go in and would have been a great start to what I'm hoping will be a long and prosperous career for Danny."