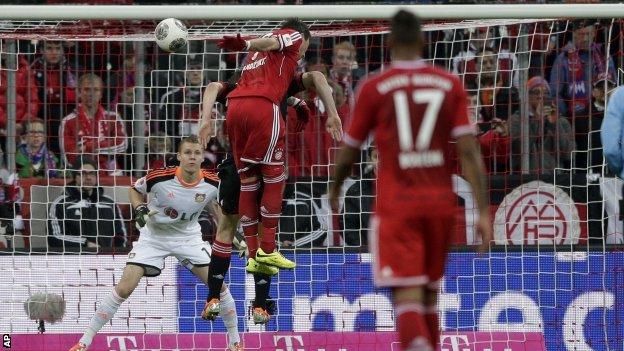 Bundesliga leaders Bayern Munich stretched their unbeaten league run to 50 matches with a comfortable win at home against Bayer Leverkusen.

Stefan Kiessling pulled a goal back with a header in injury-time.

Bayern, who had president Uli Hoeness jailed for tax fraud, are now 23 points clear in the league with nine matches left.

Bayern have scored at least two goals in their last 17 Bundesliga matches, setting a new record.

Saturday's victory was a record 17th consecutive Bundesliga victory, and they could claim the defence of their title as early as next weekend if they win at Mainz and Borussia Dortmund and Schalke fail to win.

Hoeness was convicted of major tax fraud and sentenced to three-and-a-half years in prison on Thursday.

But, against a Leverkusen side who were the last team to beat Bayern in the league in October 2012, the defending European champions continued their impressive season on the field.

Pep Guardiola's men progressed to the quarter-finals of the Champions League on Tuesday night after a second-leg draw at home with Arsenal, while Leverkusen were knocked out by Paris St-Germain.

Second-placed Dortmund's 2-1 defeat at home against Borussia Monchengladbach earlier on Saturday has made life even more comfortable for Bayern but, such is their dominance, successive titles has looked a formality for a long time.

Bayern dominated at the Allianz Arena and the pressure told on 43 minutes when Croatian forward Mandzukic met Schweinsteiger's cross with a powerful header.

The victory was made sure of soon after the restart when Germany midfielder Schweinsteiger curled a free-kick into the top corner after Diego Contento had been fouled.

Kiessling headed home Roberto Hilbert's cross in the last few seconds to pull a goal back for Leverkusen.