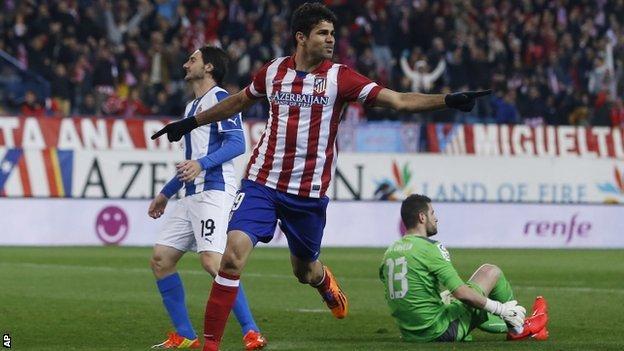 Atletico Madrid kept the pressure on La Liga leaders Real Madrid as they maintained their unbeaten home league record with a win over Espanyol.

David Villa had a header saved as the hosts controlled the opening half without creating many chances.

But Spain international Diego Costa slotted in the opener after the break from Villa's pass.

Costa shot over the bar later on from a tight angle after rounding goalkeeper Kiko Casilla.

Barcelona are four points further back in third ahead of their home match against Osasuna on Sunday.

Diego Simeone's Atletico are yet to lose at home in the league this season, scoring 44 goals in 15 matches.

They went into the match having reached the Champions League quarter-finals for the first time since 1997 with a 5-1 aggregate victory over AC Milan on Tuesday, sealed by a 4-1 scoreline on the night.

Espanyol are one of only three teams to have beaten Atletico this season but they rarely looked capable of pulling off another shock result at the Vicente Calderon.

The home side struggled to find their rhythm in the opening stages but were only denied an opener by goalkeeper Casilla, who parried Villa's glancing header wide.

Casilla then had to be alert to keep out Costa's header before the Brazilian-born Spain international had a good penalty claim turned down after a challenge by Espanyol defender Juan Fuentes.

Atletico dominated possession in the first half but struggled to break their resolute Catalan opponents down.

The second-half start in a similar fashion until Costa's 22nd league goal of the campaign came when he latched on to Villa's pass and calmly converted.

Espanyol substitute Jhon Cordoba almost levelled when he beat goalkeeper Thibaut Courtois and defender Toby Alderweireld to the ball, but the latter recovered to clear.

Courtois, who had suffered a heavy blow to the head, then blocked David Lopez's shot as Atletico hung on to a crucial victory.