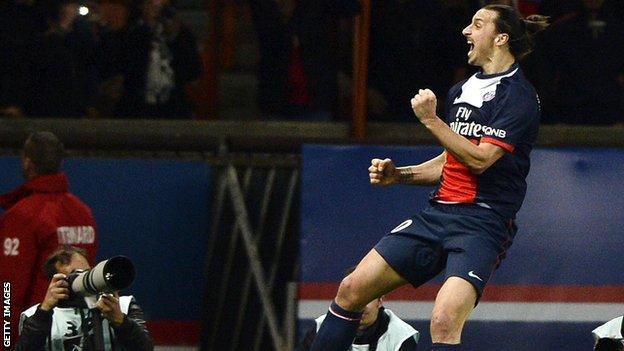 PSG dominated the first half against fourth-placed St Etienne and deservedly led when Ibrahimovic calmly rolled in from close range.

The Sweden captain doubled the lead by delicately prodding in Edinson Cavani's cross with the outside of his boot.

Only Lionel Messi has scored as many league goals than Zlatan Ibrahimovic (10) in Europe's top five leagues in 2014.

St Etienne rallied after the break but could not beat PSG's Salvatore Sirigu.

The goalkeeper acrobatically stopped St Etienne substitute Melvut Erding halving the deficit midway through the second half, while Benjamin Corgnet thumped another chance into the side-netting for the visitors.

But PSG reasserted themselves and finished strongly as they stretched their unbeaten Ligue 1 run to 13 matches.

Ibrahimovic's double takes to his Ligue 1 tally to 25 goals in 28 games this season, while he has now scored 41 times in all competitions.

Earlier, nearest rivals Monaco had briefly cut the gap to five points with a 3-2 win at Lyon.

Former Manchester United and Tottenham striker Dimitar Berbatov scored one goal and set up the other two for Claudio Ranieri's side.