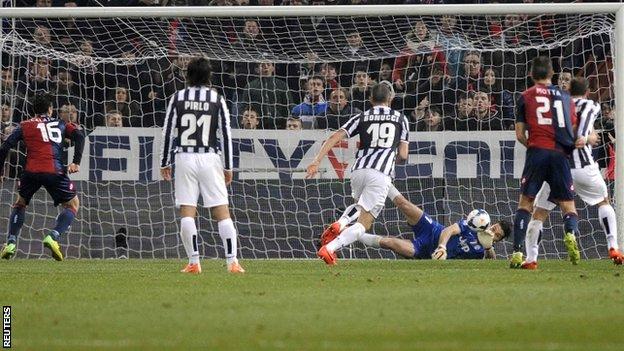 Andrea Pirlo's brilliant late free-kick earned Juventus a fortuitous win at Genoa to extend their Serie A lead to 17 points.

Southampton loanee Dani Osvaldo had two first-half goals disallowed for offside for the visitors before the break.

And Pirlo curled in the winner with a minute left, to extend their record scoring run to 41 league matches.

Andrea Pirlo has scored the most goals from direct free-kicks in this Serie A season, four.

Juventus's lead could be closed by Roma, who have two games in hand over the Old Lady, at home to Udinese on Monday.

But, with only one defeat in the league to their name all season, Juventus appear to be closing in on a third consecutive title.

Antonio Conte's men were far from impressive and, without their injured top scorer Carlos Tevez, struggled to threaten a hard-working Genoa.

They were harshly denied an opener though when Osvaldo chipped home, after latching onto Paul Pogba's sublime back-heel, only for the goal to be wrongly ruled out for offside. 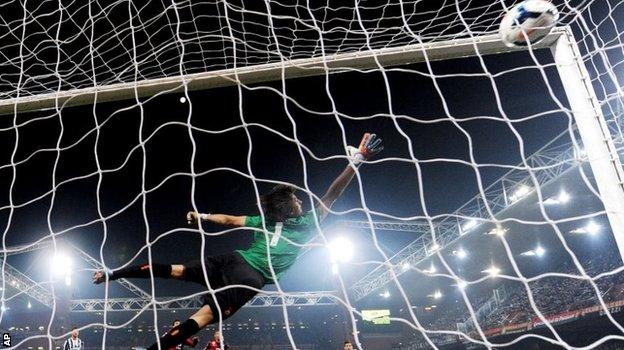 The striker had an earlier effort correctly disallowed for offside in an otherwise uneventful first half.

After the break, Genoa dominated for long periods and, after Andrea Bertolacci had two shots blocked, the hosts were awarded a penalty for Arturo Vidal's handball.

Substitute Calaio's weakly hit penalty was comfortably pushed away by Buffon and the miss proved costly as Pirlo's moment of brilliance won the match for the visitors.