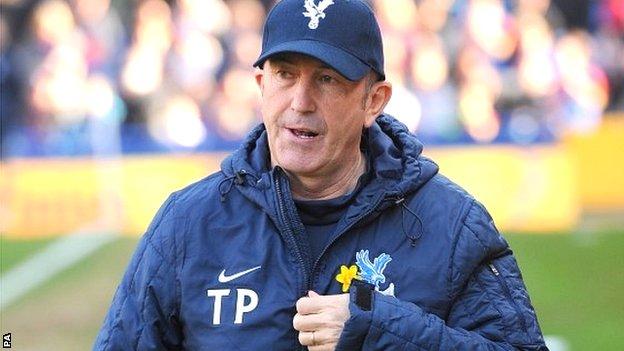 Crystal Palace manager Tony Pulis has complained to the referees' association about decisions that went against his side in their defeat by Southampton.

Palace were beaten 1-0 last weekend and sit 16th in the Premier League.

Pulis said Howard Webb should have sent off Saints' Jose Fonte and that Glenn Murray was ruled offside incorrectly.

"In the Premier you need things to go for you and they never did," Pulis said. "If Murray had gone on to score, it would've been a different game."

Pulis, who takes his team to Sunderland on Saturday, was unhappy with referee Webb and his assistants as Palace suffered their seventh league defeat since the former Stoke boss was appointed last November.

"Against Southampton, in the first 20 minutes we had two great opportunities where the linesmen flagged," he added.

"I've been on to the referees' association and the linesmen should get those decisions right because the two were onside.

"Murray was through on goal and had just the goalkeeper to beat.

"In the second half, when Fonte brings down [Palace's Yannick] Bolasie, that is a sending off."