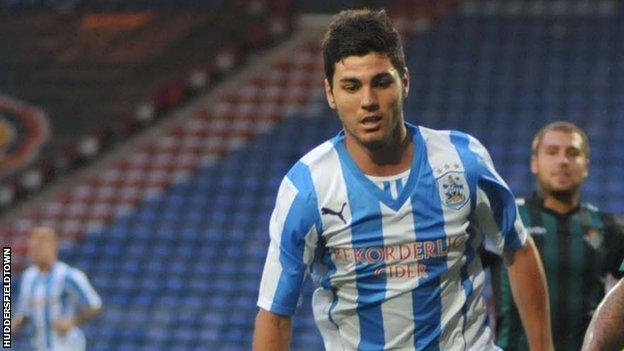 Northampton Town have signed Huddersfield striker Cristian Lopez on loan until the end of the season.

The 24-year-old Spaniard has made four appearances for the Championship side since joining them in July 2013.

Lopez, a former Valencia and Real Madrid reserve team player, went to Shrewsbury on loan in October, scoring once in five games.

Lopez takes the place in the squad of John Marquis, who was recalled by Millwall to cover an injury crisis.

He was a free agent when Huddersfield signed him after leaving Spanish third-tier side Atletico Baleares at the end of last season.

We're going to add for next season but if we keep a lot of these guys together, imagine what we could do next season

Although the Cobblers are second from bottom in League Two, they are unbeaten in five games under Chris Wilder and have closed the gap on the team outside the relegation zone to three points.

Chairman David Cardoza told BBC Radio Northampton: "I'm enjoying my football for the first time in a long time. The last couple of games, especially at home, have been fantastic.

"Even last season, getting to the play-offs, I didn't enjoy it a lot. We still left games thinking 'how did we win that?'

"We've brought in some really good players and what really pleases me is that Chris is getting the best out of certain players we might've written off at the start of the season.

"It shows what a good manager he is and that you should never give up on a player.

He added: "We're going to add for next season but if we keep a lot of these guys together, imagine what we could do next season."

Meanwhile, Cobblers striker JJ Hooper is joining Conference South side Farnborough on loan until the end of the season.

The former Newcastle player has made four substitute appearances and one start for the Cobblers without scoring, having hit five goals in pre-season.