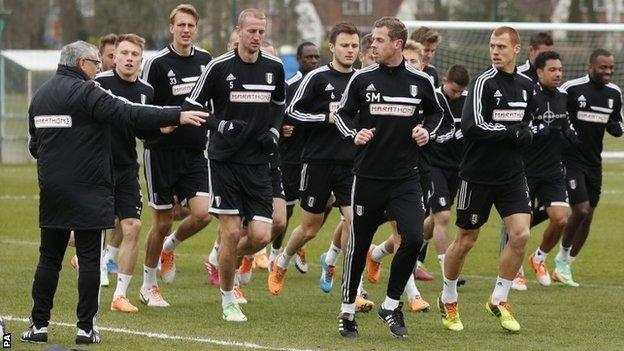 Felix Magath believes his Fulham players have been complacent over their Premier League survival chances.

The Cottagers, who host Newcastle on Saturday, are four points from safety with just nine games remaining.

Magath, who is Fulham's third boss this season, said: "The whole season they haven't realised that they are at the bottom of the table.

"Now they realise it's a relegation fight. It's an extraordinary situation. We have to stick together and fight."

Magath is yet to win a match as Fulham manager, having drawn 1-1 with relegation-threatened West Brom in his opening game and then lost the following two fixtures 3-1 against Chelsea and Cardiff.

The German stated that Fulham would avoid the drop when he took over and targeted six wins from their remaining 12 games at that time.

However, on Friday he questioned whether his players have the right attributes for the fight.

"At the beginning of the season nobody thought about a relegation fight," he said.

"The team was not built for a fight against relegation. We have to work with the players, to talk with them.

"The players tell me 'oh, we have 12 games left [after Magath's appointment], we have an easy schedule, we are able to manage this'.

"I think they were tempted by the situation that they are too secure. They don't say they are quite relaxed, but they say 'oh, we have 12 games, games are not so difficult'."