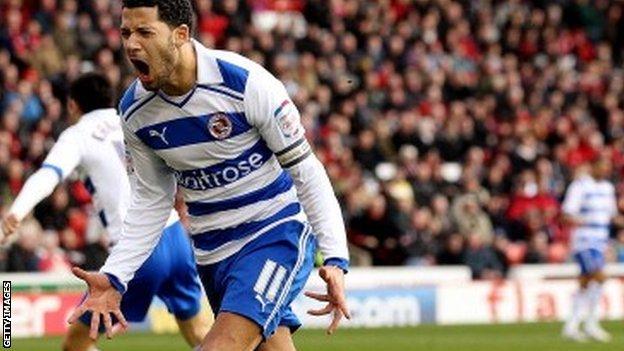 Captain Jobi McAnuff scored twice to move Reading into the play-off places and inflict more home woe on struggling Birmingham in the process.

McAnuff opened the scoring against the run of play, finding the bottom corner before the break after the hosts failed to clear a Royston Drenthe cross.

Birmingham quickly equalised through a Paul Caddis penalty after Callum Reilly was fouled by Kaspars Gorkss.

The victory ensured Reading capitalised on Nottingham Forest's heavy 5-0 defeat by Derby to leapfrog the Midlanders in the table and occupy the sixth and final play-off spot.

At the other end of the table, Birmingham are five points clear of the relegation zone and remain without a home win since October.

The Blues have now lost four of their last five games, with their last win a 2-1 victory at Blackpool on 22 February.

Birmingham began well, with Federico Macheda forcing Alex McCarthy into a reflex save. But after a promising period, the hosts fell behind.

Drenthe made inroads down the right for Reading before crossing into the box and when the home side failed to clear, McAnuff had time and space to hit the target.

Four minutes later, however, parity was restored as Gorkss was penalised for tripping Reilly inside the box. Referee Dean Whitestone pointed to the spot and Caddis levelled.

But Reading were more clinical in front of goal and McAnuff struck at the far post eight minutes from time to earn his team a valuable win.

"I feel really disappointed for the players because the one result that shouldn't have happened was a defeat for us.

"The minimum we should have got was a point. We played good stuff, we competed with a really good team and it's tough for the players to take.

"We have to regroup. There were a lot of positives to take from this but the lads are hurting and it's a quiet dressing room."

"I'm surprised [McAnuff] hasn't scored more and it's not as if he's not had chances but it's great that he's gone and scored them here and all being well he'll go on a nice run now.

"We wanted to win the division but great credit to Leicester and Burnley for what they've done so far this season. We're in the play-off race and it's a very exciting time in the season for everybody."