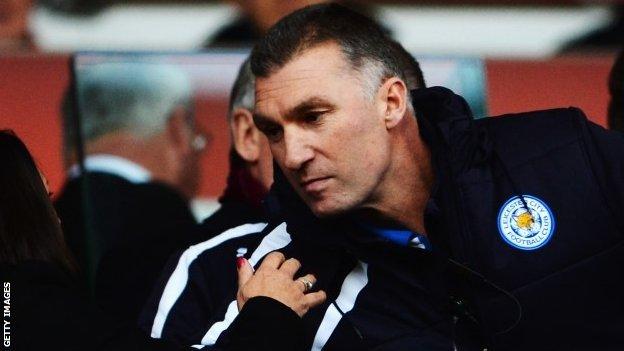 Championship leaders Leicester City were denied a fifth straight league win by Blackburn Rovers at Ewood Park as the gap at the top was closed to five points by second-placed Burnley.

Matt Kilgallon headed in an equaliser before the break for his first goal in Blackburn colours.

Leicester's last win at Ewood Park in all competitions came in the Premier League in May 1997. Blackburn have won five of the last seven home meetings against the Foxes, drawing the other two.

The Foxes went into the match seven points clear at the top of the table, with a game in hand, and are now unbeaten in 17 Championship games, winning 13 of them.

They boast the best away record in the division, with 11 wins from 18, while Blackburn had lost their last two home matches to lose pace with the play-off chasing pack.

Burnley's win at Charlton moves them to just five points off the leaders but Leicester are still 15 points ahead of third-placed Derby as they look to secure promotion to the Premier League.

The Foxes looked like continuing their good form on their travels as Vardy tapped in an opener from close-range, following De Laet's cross.

Jordan Rhodes was denied an instant leveller by Kasper Schmeichel's one-handed save, before the striker had a penalty appeal turned down following a challenge by De Laet.

The equaliser did come just before half-time though when Kilgallon met Craig Conway's corner to head home.

Blackburn almost took the lead soon after the restart but Rudy Gestede's goal-bound header was blocked on the line by Rhodes, before Vardy hit a post for Leicester after rounding goalkeeper Paul Robinson.

"I thought we were excellent. They're a top team with a top manager and we've gone toe-to-toe and had a right good go.

"It's certainly one of the better performances this season.

"There haven't been too many performances where we haven't competed, but against the league leaders we've got to be pleased with that. But we can't rest on our laurels now."

"I think we had the best clear-cut chances in the game but I think if we'd taken all three [points], with Blackburn's performance, they'd have been disappointed not to take something out of it.

"They gave us as good a game as we've had all season. At the start of the second half they were on top but we probably shaded it in terms of the best chances.

"As you get to what people call the business end of the season, we have to see it as a point gained."