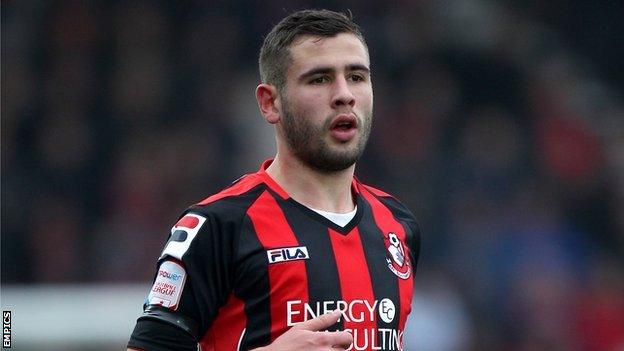 The Tykes remain bottom of the table and three points from safety following this agonising defeat.

Bournemouth are unbeaten in the last five meetings with Barnsley, winning three. They also won their home game 1-0 in September.

Matt Ritchie gave them a warning when he hit the woodwork and Cook made them pay in the 94th minute when he turned in the rebound after his effort from a corner was blocked.

The Yorkshire side remain three points behind 21st-placed Charlton, having played two games more, with 20th-placed Birmingham another five points ahead.

Andrew Surman missed a good chance for the visitors, before Woods failed to take advantage of Camp's punch by missing an unguarded net.

After the break Pedersen saw a header saved by Camp before slicing a shot wide. He then missed another good chance when he fired off target following O'Grady's lay-off.

The Cherries had the better chances in the closing stages with Ritchie hitting the bar from distance, Tommy Elphick forcing a save and then Ritchie going close again from close range.

And they got their winner when Cook beat Luke Steele at the second attempt.

"It's a very cruel game at times. When you find yourself in the position that we're in, you just want to have a stroke of luck at times and it went against us.

"Thankfully, we're still in the fight and still in the mix. If we can show this commitment and desire for the rest of the games, we'll have a chance.

"It's tough but it's not something that fazes us. We're going to have a real good go at it."

"Barnsley started the game well and had a couple of chances but overall I thought we were the dominant team and had more chances.

"It pleases me no end to get clean sheets because it's not something we've been associated with this year, but that has been a real improvement in the side in recent weeks.

"If the season finished now, I'd say that we'd achieved our objective. We're in a good position to move forward with a young team to get better next year."