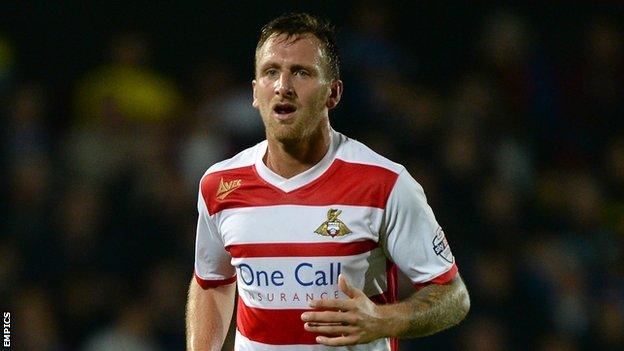 Doncaster moved further away from the relegation zone with a South Yorkshire derby victory over Sheffield Wednesday.

Chris Brown scored the only goal of the game with a tap-in after 32 minutes to take Rovers eight points clear of the bottom three.

Wednesday's Leon Best, who had missed a chance before Brown's goal, saw his header saved well by Sam Johnstone in the second half.

Doncaster have won the last three meetings at home by a 1-0 scoreline, since Sheffield Wednesday's 4-0 win there in League One in December 2004.

David Cotterill almost sealed the win for Rovers late on.

Doncaster are now unbeaten in four games and have won their last five meetings with the Owls, a run going back to November 2008.

The Owls came into the game on the back of a 4-1 win over Birmingham and 3-0 success over QPR and they started brightly against their rivals, with Best missing a sitter from close range.

James Coppinger had a chance for Doncaster but shot straight at Chris Kirkland before the hosts took the lead. Billy Sharp's shot was saved by Kirkland and Brown tapped in the rebound.

In the second half, Johnstone pulled off a save from Chris Maguire, before Kirkland denied Cotterill at the other end.

Johnstone kept out Best's flicked header and Sam Hutchinson then headed over from a corner as the Owls looked for a leveller.

But it never came and Cotterill's late free-kick had to be tipped past by Kirkland to prevent a 2-0 scoreline.

"I thought our togetherness and character ran right through the team.

"It wasn't the best we've played, by any means, but sometimes you just have to roll your sleeves up and dig out a result. The boys were fantastic.

"Sometimes it's even sweeter when you get the points through sheer hard work and determination."

"It was the sort of game where the first goal would probably end up defining the game.

"We thought Chris Brown was offside for their goal. Maybe they got a lucky break there but far too many of our boys had an off day.

"Our final ball was really poor. The quality on the ball let us down.

"We said 'go again' after beating Queens Park Rangers but it was probably a game too far for us."