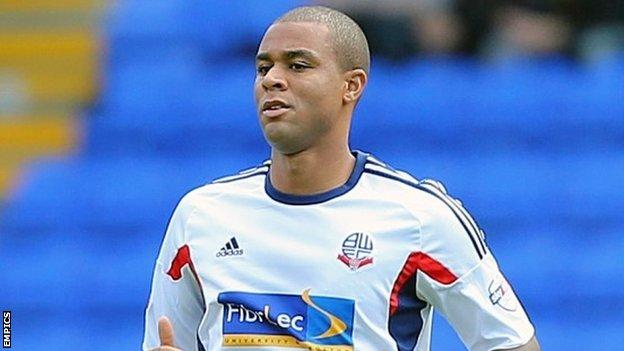 Yeovil squandered the chance to move out of the Championship relegation zone as they threw away a two-goal lead and missed a penalty in a draw with Bolton.

Ishmael Miller volleyed home from close range and Kevin Dawson made it 2-0.

Lukas Jutkiewicz pulled one back but Bolton went down to 10 men and conceded a penalty when Alex Baptiste fouled Dawson in the 80th minute.

Bolton are unbeaten in four meetings with Yeovil, winning twice

The result leaves Yeovil 23rd, one point off safety, while Bolton are nine points above the relegation zone.

Yeovil had to weather an early storm from their visitors, with Jutkiewicz and Baptiste missing early chances.

But they led when Dawson fed Miller to open the scoring with his fifth goal in five games.

Tom Lawrence was impressive for the hosts and he forced a save from Bogdan with a 25-yard drive, before setting up Dawson, who finished calmly.

Bolton were better after half-time and Mohamed Kamara had two early chances, skewing a shot wide and then firing a weak effort at Marek Stech.

They pulled one back when Jutkiewicz found space to fire an effort into the far corner.

But Yeovil, a non-league team until 2003, should have sealed a first ever victory against Bolton when Baptiste was sent off and they were awarded a penalty. The visitors were livid with the decision but celebrated moments later when Bogdan pulled off a brilliant save from Miller.

And it got better for the Trotters in the 83rd minute when Knight's header looped over Stech.

"It does feel like a defeat but we've played a team who were one of the favourites for promotion this year, even if Bolton are struggling in the league.

"We were magnificent in the first half and it feels like a defeat for all of us - supporters, players and the management - because of the nature of being 2-0 up.

"We didn't come out well after half-time. We got the players out early for the second half but Bolton got an early goal which gave them the impetus and we then had to defend."

"Half-time came at a good time for us and we had some strong words and tactically changed the team to go more direct.

"In the end I thought the three points could have gone our way and I'm disappointed not to win it.

"Obviously they had a penalty, I've got no complaints about that or the sending off, but when they missed that penalty it was one-and-a-half minutes before we went up the other end to score.

"We had enough chances to win the football match."