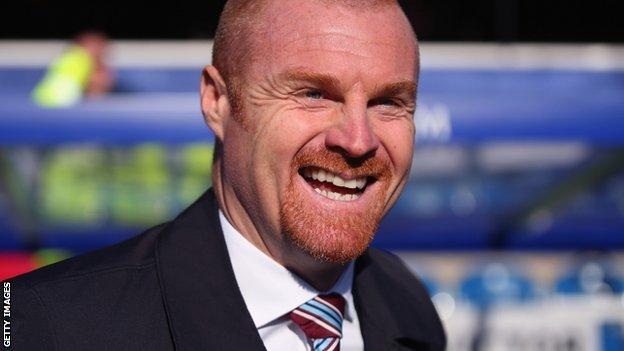 Burnley remain 10 points clear in second place in the Championship after stretching their unbeaten league run to 15 matches with a win at lowly Charlton.

Ashley Barnes headed Burnley into the lead with his first goal since signing from Brighton in January.

Sam Vokes doubled the lead from the penalty spot, after he was fouled by Dorian Dervite.

The scoring was completed when Michael Kightly's cross was deflected in.

Burnley's last defeat came at Middlesbrough on Boxing Day but they entered the match at The Valley without 25-goal striker Danny Ings, who was sidelined by an ankle injury.

Burnley are unbeaten in their last eight away games in the Championship, winning four.

But, in the England Under-21 international's absence, Barnes took his opportunity as he got on the end of Junior Stanislas's cross to break the deadlock with a header before half-time.

The former Brighton striker was only denied a second when his header was kept out by goalkeeper Ben Hamer at point-blank range.

Charlton had lost only one of their previous seven home matches in all competitions but, just out of the relegation zone on goal difference, Jose Riga's side face a fight to escape relegation into League One.

Burnley's victory was ultimately convincing as Vokes calmly slotted in from the penalty spot after the break, following Dervite's challenge.

And, despite some pressure from the hosts, the Clarets sealed victory in the last minute when substitute Michael Kightly crossed from the left and, with the aid of a deflection, the ball ended up in the net.

"Ashley Barnes is getting his chance now and I thought he delivered an all-round good performance.

"He's full of life, he wants to work for the team and he'll get more and more used to how we work.

"To get a goal is excellent. He knew the challenge in front of him when we brought him in."

"Certainly we had the first chances during this game. But instead of scoring we conceded.

"It was already difficult to score against this team but we conceded and we knew at that moment it would be more difficult and we maybe had to change the way we play.

"We continued even in the last quarter to try to play more realistically, more direct - but, against this team, they were waiting for that."