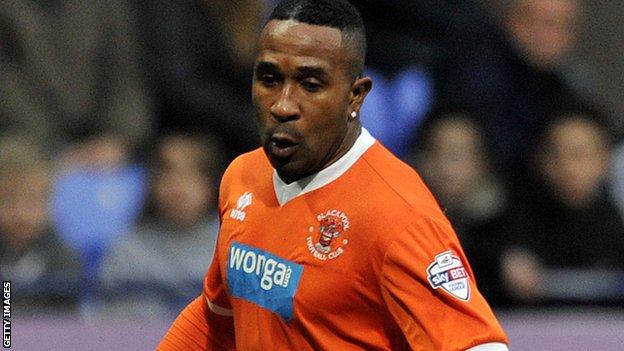 Nahki Wells had a goal disallowed for Huddersfield, while James Vaughan headed wide.

But Blackpool held firm to earn only their second win in 21 games.

It took just four minutes for the home side to open the scoring as Perkins stole possession from former Seasiders midfielder Keith Southern and fed Fuller, who outpaced defender Anthony Gerrard to fire home.

The goal gave Blackpool confidence and they almost added a second soon after when David Goodwillie set up Gary MacKenzie, but the defender could not find the net.

Huddersfield finally regained their composure and should have done better when Adam Hammill broke down the right and sent a cross into the area, but the ball just evaded Vaughan.

The visitors started to take control of possession in the second half but clear-cut chances were still hard to come by.

Oliver Norwood had a shot blocked, while Wells had the ball in the back of the net when he fired in the rebound from Clayton's shot but was flagged offside.

However, as Huddersfield pushed, they left gaps at the back and Blackpool almost capitalised when substitute Andy Keogh's long-range effort late on was pushed away by Smithies.

"It wasn't a great game to watch but at this stage of the season it is all about getting three points and we did that with hard work.

"We are still in a place in the league that I don't want to be.

"I'm not going to take my foot off the gas because we have simply won a couple of home games."

"Things will improve, there is no doubt about it, but it will take a little bit of time and a bit of work.

"We have got nine games to go and if we don't pick up points we are certainly going to be lower in the league than we want to be.

"Motivation shouldn't be an issue and I don't necessarily think it is an issue."