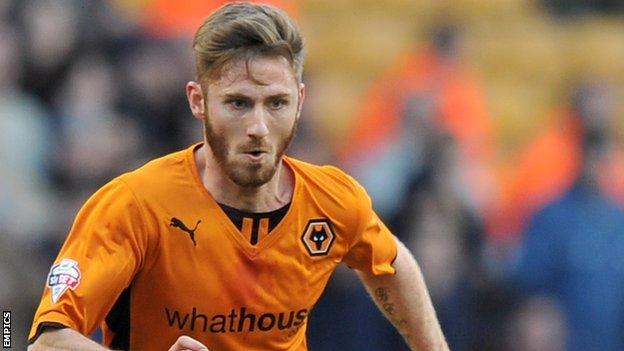 Wolves dampened Sheffield United's 125th anniversary celebrations to move closer to a return to the Championship.

Henry struck a post and at the other end Richard Stearman cleared off the line from John Brayford.

And after the break Henry was central for Wolves' second, crossing for Edwards who this time got a touch.

Jose Baxter fired into the side netting as Blades attempted to respond, but Leon Clarke squandered a chance to make it 3-0 when through one-on-one.

The result, which ends an 11-game unbeaten run and a sequence of eight games without conceding for Nigel Clough's men, failed to completely take the edge off the party atmosphere at Bramall Lane, as the club marked their 125th birthday by parading more than 50 former players across the pitch before kick-off.

But Wolves, themselves undefeated in 10 matches until a midweek loss to Crawley, guaranteed they will finish the weekend as League One leaders.

"We said it would be a good measure of how far we've come - there was not a lot in it. They took the couple of chances that they got, and we didn't today.

"I thought when we settled down we had the better of it. We got on the front foot, and we looked dangerous.

"It's good that the players are so disappointed. If you're going to lose your unbeaten run, you might as well lose it to the team top of the league."

"It was a fantastic win, I felt that we needed to make some changes and we needed some fresh energy in the team.

"It was a system we've worked hard at. I do have confidence in the players coming in. They know their roles and it's a big game to come in for.

"As the game wore on I felt we handled them better and better, some of their football was very very good, as was ours.

"We've been up and down the country, two tough away games this week, the side needed to change and we needed fresh energy."