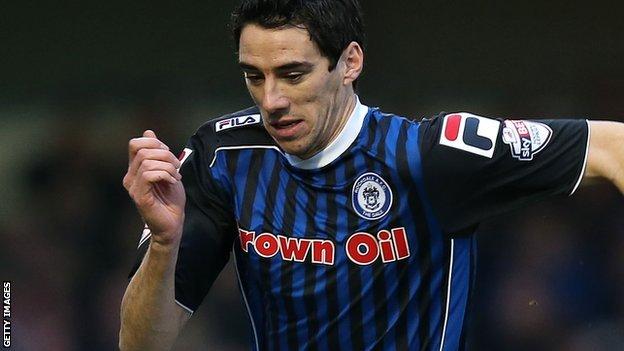 League Two leaders Rochdale continued their promotion push away at Wycombe with their third straight win.

Wycombe started the brightest, with Reece Styche hitting the post as Rochdale struggled to impose themselves.

The second half saw Wycombe twice go close, before Rochdale took the lead when Jamie Allen volleyed in Peter Vincenti's knockdown from 12 yards.

Vincenti made it 2-0 with a close-range finish to leave Wycombe in 21st place.

"It's been the story of our season; not taking our chances. We've created plenty of chances, we've hit the post, we've had a couple cleared off the line. Also I thought there were a couple of genuine penalty claims.

"You've got to stick your chances in when you get them. Rochdale have done that. Their chances were few and far between, but they took them.

"If we keep playing like that, we've got enough to stay up without a shadow of a doubt.

"Confidence is low, it's the disappointment that we're not taking things from games. Obviously it's goals that win games.

"We've missed a couple of good opportunities in games of late and we need to start putting them in the net. We really need to get someone on form and hitting the target regularly."

"We're still having to contend with injuries and suspensions but I trust the squad of players that we've got.

"It's not about dominating possession, it's about creating opportunities - even if it's only one and taking the points. We managed to do that today.

"We've won 2-0 away from home today. It's just another game gone, three points on the board again and we're looking forward to the next game."