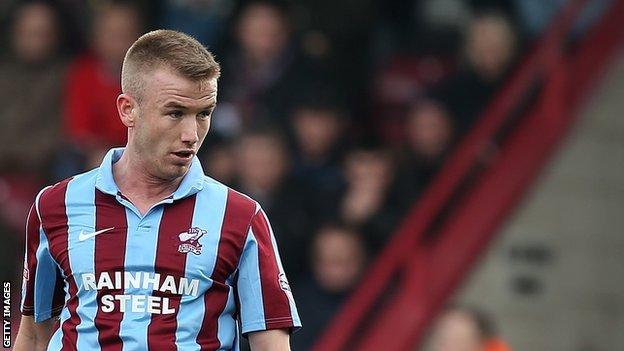 Paddy Madden's goal was enough to beat Burton and move Scunthorpe into second.

It was third place versus fifth at kick-off, although a lacklustre first half failed to live up to the billing.

The Iron had not managed a shot on target until Madden's second-half volley - a fierce right-footer from the edge of the area into the top corner.

"It's a huge three points and an amazing goal to win the game, a goal that deserves to win any football match.

"At this stage of the season it's about grinding out the wins. On the first half performance, it was not good enough

"The second half we pushed and we probed and we were the better team."

"First half we were absolutely magnificent. We played really really well - as well as we've played. It's as much of the ball as we've had and we got into some great positions.

"I felt we didn't exploit them and weren't perhaps as ruthless enough in the attacking third. That's my disappointment with the first half really.

"Second half, for some reason, we just conceded ground again and I don't know why we keep trying to do that, because we spoke about it at half-time."