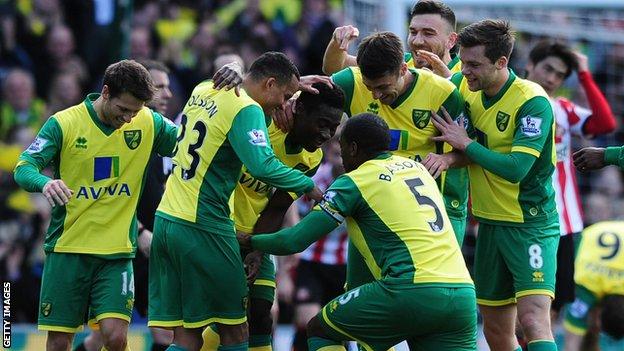 Tettey's spectacular first Premier League goal for Norwich secured the victory for the hosts, who are now seven points clear of the bottom three.

Sunderland's Fabio Borini and Brown had efforts saved before Marcos Alonso was sent off for two bookable offences.

The result eases the pressure on Norwich boss Chris Hughton, who last week was taunted by his own supporters during their 4-2 defeat at Southampton.

Some Canaries fans had chanted "you don't know what you're doing" at the former Newcastle manager seven days ago, but his side, which featured five changes, responded with a dominant display against a terrible Sunderland team.

Brown was sent off when the sides played out a goalless draw in December and the former England international was at fault as the hosts took a 20th-minute lead.

The defender failed to clear Martin Olsson's low cross and the ball fell to Johan Elmander, with the Swede setting up Snodgrass, who scored for the fourth time in seven games.

"Before the game it was described as a must-win match for both teams and it was an excellent day for Norwich, who now have breathing space between them and the bottom three, but Sunderland are in big trouble. Gus Poyet's side were so ragged in the first half."

Norwich piled on the pressure with Jonny Howson having a shot well saved by Vito Mannone before Ricky van Wolfswinkel and Wes Hoolahan both missed further chances.

But the Canaries extended their lead when Tettey volleyed in from 30 yards after John O'Shea's clearing header.

Sunderland remain 18th, are three points adrift of safety and their seven-season spell in the top flight could be coming to an end.

They have played at least two games fewer than other sides in relegation trouble, but face a daunting end to the season, including games against six of the league's top seven to come.

Before the game, head coach Gus Poyet said they had to gain the results their performances deserved and he would be furious with a lacklustre display that lacked inspiration and creativity.

Aimless long balls were routinely hit forward unsuccessfully to American Jozy Altidore, who was making his first start since being left out of the squad that lost 3-1 to Manchester City in the League Cup final.

A desperate Poyet made a double substitution after only 40 minutes as he hoped for a response from his side.

Sunderland nearly pulled a goal back six minutes after the restart when Adam Johnson's cross was met by Brown but an excellent reflex save by John Ruddy denied the centre-half's close-range header.

However, that was as good as it got for the visitors, who have now failed to score in their three games since their Wembley defeat earlier this month.

Norwich, now 13th in the Premier League, could have extended their lead but Van Wolfswinkel's header was pushed over by Mannone.

The Dutch striker, an £8.5m signing from Sporting Lisbon last summer, has now failed to score in 22 games in all competitions - a run of 1,256 minutes (20 hours, 56 minutes), although that was the only negative for the Canaries.

A miserable day for Sunderland got worse in injury-time as Alonso needlessly handled the ball for his second booking.

"From start to finish we were excellent. It is difficult when you have such a good first half to sustain that performance but it's another clean sheet here and we have been good at Carrow Road. We now have to take what we have done here away from home.

"We could have had more goals and with the manner of this win, if it doesn't give us confidence then nothing will. We were not good enough last week but today has been a good day for us."

"The first 30 minutes was the biggest disappointment; we were second best and not competing enough. We need to be better from the beginning of games.

"We have 10 games left and we are the only team that have that quantity. We need to get at least 36 or 37 points so win four from 10, but we need to play better than we did today.

"It is about keep believing and making sure we don't play like we did in the first 30 minutes, but I'm sure we are going to be OK. I'm a positive person and believe in what we do - and the players do as well."