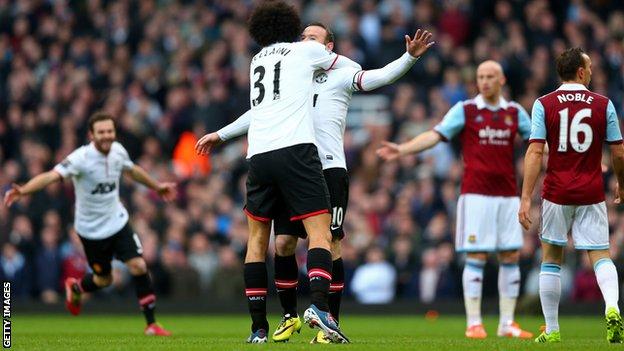 Rooney, now third in United's all-time goalscorers list on 212, put his side ahead with a stunning lob from just inside the Hammers' half.

West Ham were poor, Andy Carroll's tame header the closest they came to a goal.

United manager David Moyes, without Netherlands striker van Persie for up to six weeks due to a sprained knee, has had little to smile about this season.

But Rooney's spectacular eighth minute finish had the Scot out of his seat in the dug-out applauding a truly wonderful goal.

There were shades of David Beckham's memorable finish from the halfway line for United against Wimbledon in 1996 as Rooney, spotting Adrian well off his line, outmuscled James Tomkins before unleashing a brilliant lob which sailed over the goalkeeper and into the net.

This was United's ninth Premier League win away from Old Trafford, where the Red Devils return on Tuesday for the Manchester derby.

While United's domestic home form - five defeats in 14 games - continues to frustrate Moyes, he is at least finding some solace on the road.

With Beckham and England manager Roy Hodgson in the Upton Park main stand, United carried on where they left off after reviving their Champions League campaign at Olympiakos' expense on Wednesday.

Rooney's spectacular finish set the tone for a comfortable victory to move back to within three points of fifth spot in the table.

The Hammers should have equalised in the 15th minute.

But Carroll, who was unmarked, spurned a glorious chance to give Hodgson a reminder of his goalscoring prowess ahead of the World Cup when he headed straight at David De Gea from close range.

United, who had Michael Carrick as a makeshift centre-back in the absence of the injured Rio Ferdinand and suspended Nemanja Vidic, carried a threat each time they went forward.

Shinji Kagawa, on only his eighth league start of the campaign, forced a fine save from Adrian before the Spaniard beat away a goal-bound shot from countryman Juan Mata.

Moments after the Hammers had claims for a penalty waved away when Noble went to ground under a Fletcher challenge, Young powered deep into West Ham's half.

His cross fell to Noble who could only kick the ball into Rooney's path and the United man made no mistake from close range.

West Ham still have to secure their Premier League survival and face Liverpool (home), Arsenal (away) and Manchester City (away) before the end of the season.

Sam Allardyce can only hope his team can raise their game after a limp performance.

The damage had already been done when Fellaini crashed to the ground inside the West Ham penalty area after Antonio Nocerino's challenge in the closing stages.

But there were few complaints from the visitors when referee Lee Mason waved away their appeals. United had the points safely in the bag.

"The first goal knocked the stuffing out of us.

"It's such a wonderful goal, you've got to admire the finish, but to get off to a start like that when we were looking forward to this game, having won the last three at home and trying to get more points on the board.

"Straight away you're 1-0 down against a side that have got an abundance of talent.

"I definitely thought there was a foul [leading up to the first goal].

"When the ball comes forwards, James Tomkins is going to try and win it. Wayne, not making an attempt for the ball, pushes him with his left arm."