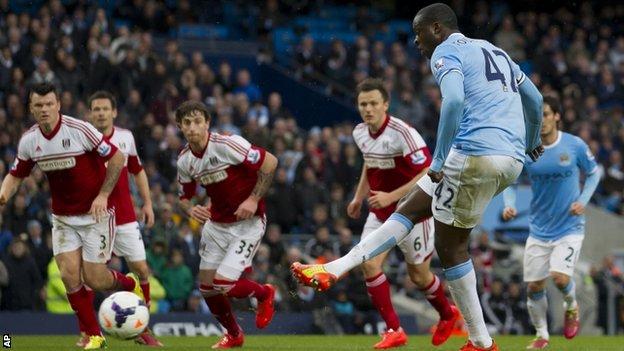 Yaya Toure scored a hat-trick as Manchester City responded to Chelsea's thrashing of Arsenal with a resounding win over 10-man Fulham.

With Chelsea taking a temporary nine-point lead over City after thumping the Gunners 6-0 earlier on Saturday, it was imperative that Manuel Pellegrini's side kept pace with Jose Mourinho's league leaders.

And they were inspired by their talismanic Ivorian midfielder, who scored twice from the penalty spot and hit a stunning third from 25 yards to take his season's total to 20 goals before Fernandinho and Martin Demichelis turned it into a rout late on.

City were perhaps fortunate to earn the first spot-kick when Fernando Amorebieta clipped Alvaro Negredo, but the Fulham defender could have little complaint for the second when, eight minutes into the second half, he chopped down David Silva and was sent off.

Yaya Toure's hat-trick is the seventh so far in the Premier League this season, but Manchester City's first in the league since April 2012.

That left City to cruise home against Felix Magath's side, who remain bottom of the table, four points from safety, with their position looking increasingly perilous.

Toure received a standing ovation as he left the field in preparation for Tuesday's Manchester derby at Old Trafford. And although the injured Sergio Aguero will miss that game, a return to goalscoring form is timely for Pellegrini's title chasers with Chelsea and Liverpool also registering big victories.

Liverpool's win over Cardiff meant that City overtook Arsenal to move into third place, but they remain two points behind Brendan Rodgers's second-placed side, and six points in arrears of Chelsea.

The 2012 Premier League champions City are the only team that has the title in their own hands. Should they win their remaining 10 games, they will be champions, but they now enter a critical week where Tuesday's trip to Old Trafford is followed by a journey to face the wounded Gunners next Saturday.

The result was never in doubt on a wet afternoon once City had scored a second penalty, but they did survive a few scares in the first half. Fulham were inches from taking the lead through Kieran Richardson's fizzing shot after 23 minutes.

Yet within two minutes the hosts had won a penalty, with a strong dose of good fortune associated to it.

Referee Jonathan Moss did not whistle when Amorebieta clipped Negredo as the pair pursued James Milner's lofted pass, but his assistant indicated that the Fulham defender had fouled the striker. Once Amorebieta had been booked, Toure sent David Stockdale the wrong way from the spot.

Manchester City had 22 shots compared to Fulham's six. The Cottagers failed to have a shot on target, while City had 12 shots on goal.

City looked to Silva for their inspiration and he came close to adding to the lead when his chipped effort was cleared off the line by Amorebieta. Aleksandar Kolarov also hammered a shot goalwards but it was expertly tipped onto the bar by Stockdale.

There were moments of worry for Pellegrini's side as Sascha Riether and Amorebieta headed off-target but, eight minutes after the break, City were awarded another penalty and this time there was no debate.

Milner threaded a delightful pass through to Silva, who was upended by Amorebieta in the box. The Venezuelan received a straight red card and trudged off the pitch before Toure calmly tucked in.

The best was still to come from the Ivorian, though, as he collected a well-worked free-kick and curled the ball into the top corner for the latest addition to his stunning goals collection this season.

By this stage, Fulham were distraught and shattered and their misery was complete when Fernandinho found the roof of the net after a burst into the box following a corner six minutes from time. Demichelis then scored from close range for his first Manchester City goal.

Shots on Target
Home12
Away0