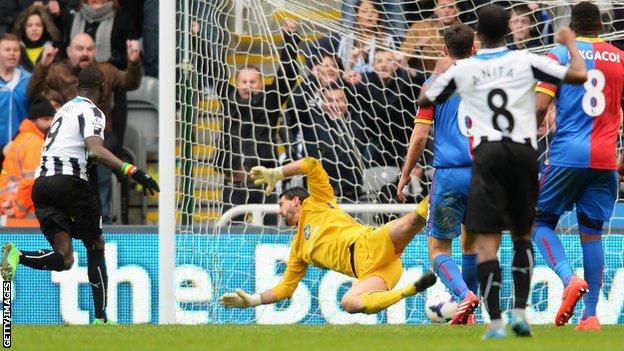 Newcastle dominated for large periods but struggled to find a way past Julian Speroni, who denied Cisse's early shot.

Palace keeper Speroni again kept out the hosts as he gathered Cheick Tiote's low effort, while Cisse headed over.

It was a heartbreaking defeat for Palace, who had looked like escaping with a valuable point as they battle against relegation. They remain one place and three points above the bottom three.

Newcastle, meanwhile, move up to eighth and, while a top-five finish looks beyond them this season, the win will come as more relief for home fans following a run of four successive defeats in all competitions at St James' Park earlier this year.

They had won their last fixture there, with Loic Remy's goal enough to beat Aston Villa 1-0, but the France international has since suffered a calf injury and Newcastle's reliance on the striker was laid bare when they failed to trouble Fulham in their last Premier League fixture.

Despite having rarely threatened the Cottagers' defence in that game, Newcastle assistant John Carver - in the dugout as boss Alan Pardew served the second of his three-match stadium ban - kept faith with Cisse and Luuk de Jong in attack.

The pair had managed just one goal between them in the league all season, but the decision to start with them again was almost vindicated early on. Cisse opened up space for himself inside the area with a smart turn and struck a powerful shot straight at Speroni, who then parried the ball into the path of De Jong but the Dutchman headed over.

Palace were evidently more focused on nullifying Newcastle than attacking themselves as they largely kept nine men behind the ball, and they failed to force goalkeeper Tim Krul into a meaningful save in the first half.

Instead, it was Newcastle who came closest to opening the scoring before the break as Cisse smashed a first-time volley straight at Speroni from Moussa Sissoko's cross.

The visitors emerged positively for the second half and only the woodwork denied them as the lively Bolasie wriggled his way into the area before curling in a shot that clipped the top of the crossbar.

That chance was enough to convince Carver to make a change as Ben Arfa - back in the squad after a month out with injury - replaced De Jong.

It had the desired effect as the Frenchman's determined and direct running allowed Newcastle to regain control. Tiote strode through but shot tamely at Speroni before Cisse powered a header just over the bar from Ben Arfa's cross.

Palace responded by again packing their defence and it looked like they had done enough to frustrate the hosts but their resistance was broken when Ben Arfa curled a teasing cross behind the defence and Cisse headed in.

"When Hatem Ben Arfa came inside, I thought he was going to shoot, but he had the sense to stick it on Papiss Cisse's head and he probably took the hardest chance, because it came quickly.

"He guided it past the goalkeeper, and there's nobody more pleased for him than me. Cisse's not going missing, he's not hiding and sometimes you can when you are lacking in confidence.

"Cisse is a confidence-type player and you know what strikers are like, if they get one goal, sometimes they get two, three, four goals, so hopefully he can go on a run."

"The players have done really well and to be beaten by the last kick of the game was disappointing.

"I think we created some good chances. We had good opportunities in the first half and in the first 15 minutes of the second half.

"The fixtures have not been very kind with a game at Sunderland and then Newcastle a week later but the performances the lads have put in have been absolutely fantastic."