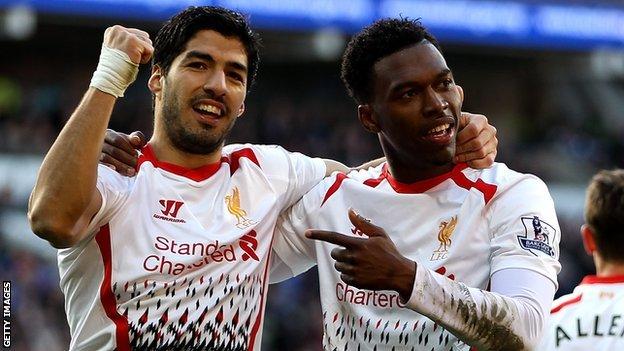 Luis Suarez equalled Robbie Fowler's 28-goal record for a Liverpool Premier League season with a hat-trick as they kept the pressure on leaders Chelsea by seeing off Cardiff.

Suarez levelled after Mutch's opener and Martin Skrtel did the same after Campbell struck.

Skrtel headed another, Daniel Sturridge and Suarez added one each, before Mutch's consolation and Suarez's third.

After twice going behind in the first half, Liverpool underlined their credentials as title contenders by remaining composed and confident against a side battling against the serious threat of relegation.

With most of their fellow strugglers also losing, Cardiff ended the day no worse off than they started at second from bottom.

Feelings among some protesting home fans also remained the same over the club's continued rebrand from blue to red under Malaysian owner Vincent Tan.

With former Swansea boss Brendan Rodgers' side arriving in the Welsh capital on the back of a 3-0 win at Manchester United, the form book was heavily-weighted against Ole Gunnar Solskjaer's men.

The hosts took the game to Liverpool and were rewarded with Mutch's well-taken opener after former Swansea City midfielder Joe Allen gifted the Cardiff attacker possession.

Liverpool's response was swift as Suarez latched on to Glen Johnson's cross to beat David Marshall from close range.

The visitors were guilty of giving Mutch too much space in the build-up to Cardiff's second.

Campbell was equally free to gather Mutch's through ball to hit home from almost the identical spot from which Mutch had scored.

Given the gulf in league positions and winning run it was no surprise that Liverpool's confidence remained unshakeable.

And when Brazilian Philippe Coutinho's cross allowed Skrtel to add the deft scoring touch late in the opening period, Cardiff were left to discover whether their self-belief was as well-founded as Liverpool's.

That test became even more stern after Coutinho crossed following a corner for Skrtel to head home his second in the 54th minute.

The Bluebirds were down to nine men at that point as Kevin Theophile-Catherine and Mutch were receiving treatment on the sidelines.

And when Sturridge sent through the pass that allowed Suarez to stylishly add his second, the contest was all-but over.

Johnson then found Suarez, whose pass gave Sturridge the chance to score from close range.

Mutch gave the home side late hope with his header and the announcement of five minutes of added time gave Solskjaer's side another boost.

But when substitute Wilfried Zaha hesitated under a long ball before falling to the floor, Suarez had the time and space to tease home goalkeeper Marshall before putting the finishing touch to Liverpool's impressive display with a hat-trick.

"We had them exactly where we wanted.

"We tested them defensively and we scored some fantastic goals, and maybe we conceded two poor goals. Liverpool didn't have a lot in the first half, chances wise.

"[Suarez] is a top, top striker. He is on the move all the time. But for long periods, I thought we dealt well with him, especially in the first half."

"[Suarez's] determination, his desire, his will is at such a big level. He is a world-class player who is enjoying his football, and long may it continue.

"The mental resilience is how we've grown over the past 18 months, and that confidence to know we can get back in the game.

"You look at our imagination and creativity today. I think the crowd felt that every time we were in their half, we could score. We've got footballers, technicians, who can open up a game for us."