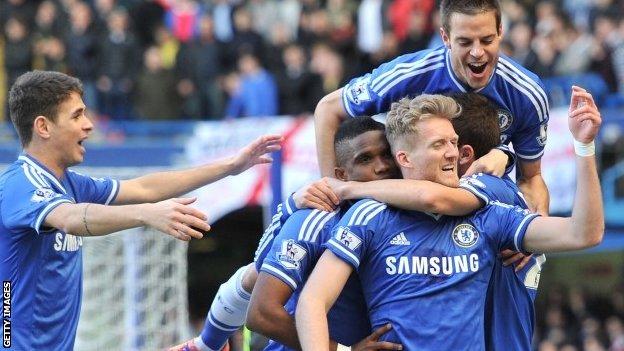 Arsene Wenger's 1,000th game in charge of Arsenal turned out to be an occasion to forget for the Frenchman as his 10-man team were crushed by Chelsea.

Arsenal were two behind after seven minutes, with first Samuel Eto'o and then Andre Schurrle benefiting from clinical Chelsea counter-attacking.

Eden Hazard's penalty after a Alex Oxlade-Chamberlain handball all but finished the match as a contest.

Substitute Salah's strike completed a miserable afternoon for the visitors, who appeared to have the wrong player sent off when Kieran Gibbs was dismissed following Oxlade-Chamberlain's first-half handball.

It was Jose Mourinho's biggest Premier League victory as Chelsea manager and also the first time in Chelsea's history that they have scored six times against their London rivals.

During a week in which Wenger has received much acclaim for his longevity and success, the Frenchman also prophetically remarked that every defeat left "a scar in your heart that you never forget".

A day to forget for Wenger

Wenger also went on to say there had been "much suffering" - as well as joy - since he joined Arsenal in 1996 and watching his team beaten so convincingly by the Premier League leaders, severely damaging their title hopes in the process, would have caused the 64-year-old much pain.

The visitors were caught dilly-dallying in possession on too many occasions, leaving Chelsea's powerful midfield to steal the ball with ease and ruthlessly surge forward to get the better of a ragged Arsenal defence.

Arsenal host Manchester City on Saturday after a midweek tie against Swansea and defeat in either of those matches would knock the Gunners - seven points adrift of leaders Chelsea - out of the title race.

It was Jose Mourinho's Chelsea who beat Wenger in his 500th game in charge of Arsenal in 2005 and the Portuguese, who has now not lost to Wenger in 11 games, ruined the Frenchman's day once again.

The story could have been different had Petr Cech not dived low to save Olivier Giroud's stabbed effort from close range in the opening minutes.

But the striker failed to make the most of Tomas Rosicky's through ball and Chelsea counter-attacked through Andre Schurrle and Eden Hazard before the ball fell to Eto'o, who cut in to score with his left boot.

Nemanja Matic then nicked the ball from the lacklustre Santi Cazorla and put Schurrle through. The German found the bottom left corner, just as Eto'o had done two minutes earlier.

Wenger, disheartened in the dugout, threw a bottle of water on to the sidelines but the afternoon would soon get worse for him.

Oxlade-Chamberlain conceded a penalty for tipping Hazard's curling effort away with his fingertips. The Belgian scored from the spot but referee Andre Marriner wrongly sent off Kieran Gibbs, despite Oxlade-Chamberlain telling Marriner he was the culprit.

Three minutes before the break Chelsea were further ahead as Schurrle and substitute Fernando Torres created a simple tap-in for Oscar.

It was the first time Chelsea had scored four first-half goals in a league game since April 2012, when QPR were the opponents.

Inevitably, more goals followed after the break with Oscar doubling his personal tally by finding the corner and then substitute Salah beating the off-side trap to confidently finish beyond Szczesny.