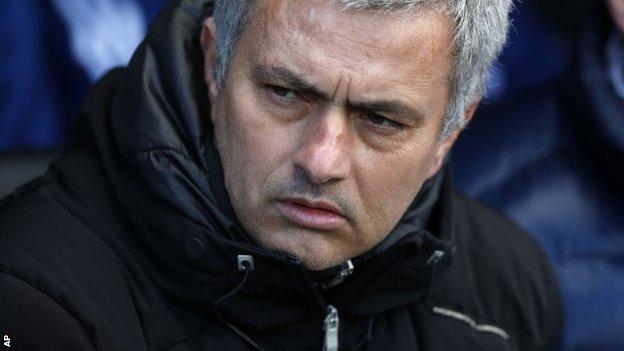 The Blues lost 1-0 to Aston Villa in the Premier League's late kick-off on Saturday before hosting Galatasaray in the Champions League on Tuesday.

"If we played on Friday night, it makes a difference to who? It'd be a full house, the same," said Mourinho.

"If it was the only match on TV, the (audience) share would be fantastic."

The Blues' last-16 tie against the Turks is delicately poised at 1-1 heading into the second leg at Stamford Bridge in midweek.

And while the 51-year-old says he has no problem with television companies determining the schedules, he believes England's football authorities should consult with clubs more.

While admitting it suits his club, Mourinho believes title rivals Manchester City should not have been asked to play in the FA Cup late on Sunday evening, at Barcelona in Europe on Wednesday night and in Saturday's early kick-off at Hull, which they won 2-0.

"I really don't understand why City play Saturday," Mourinho said. "And I'm speaking against me: I would prefer them to play on Friday, if possible.

"I'm trying to get this for all of us, not just me. I don't understand why a team that comes from Europe, playing on Wednesday, must play at 12:45 on Saturday.

After Saturday's matches, Chelsea top the Premier League table with a six-point lead over second-placed Manchester City, although Manuel Pellegrini's men have three games in hand.