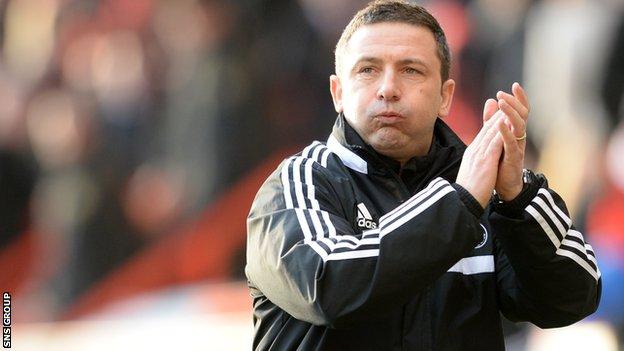 Manager Derek McInnes thinks League Cup final victory on Sunday could give his players a greater appetite for success.

The Dons, who will be backed by 40,000 supporters, take on Inverness CT aiming to bring silverware back to Pittodrie for the first time since 1995.

And, with a Scottish Cup semi-final against St Johnstone to come, fans are dreaming of a cup double.

"There is nothing better than that taste of success," said McInnes. "It should be like a drug to players."

McInnes - who, along with assistant Tony Docherty, signed a two-year contract extension until the summer of 2017 this week - is not looking beyond the final at Celtic Park but he knows just how important the club's first piece of silverware in 19 years could be to his players.

"Winning games should be like that and if there is a prize at the end of it, a trophy, then I don't think it would do us any harm going forward because once they have experienced it, they will want it again as quickly as possible.

"We don't want to get ahead of ourselves, but if we can win the trophy there will be huge celebration across the board, myself and the players included.

Route to the final

"We realise how many people want this, the numbers coming to watch us will suggest that.

"But the most pleasing thing for me will be how rewarding a win will be for the players, because I see them every day and how much they want it."

McInnes has certainly made a huge impact in his first year at Pittodrie, with Aberdeen sitting second in the Premiership and within reach of both cups.

The former St Johnstone and Bristol City boss took charge of the team last April when predecessor Craig Brown moved into the boardroom, and McInnes says those final games in the league campaign allowed him to put his plans in place for this season.

"At this juncture I don't think things could have gone much better to be honest," he said.

"I think it was important that we had that period before the end of last season to make those calls of who was staying and who wasn't.

"When they all came back in the summer, they all knew - even those who weren't my signings - that they were my players, they were there because I wanted them there and so that period was important.

"I am delighted with what we have got up until now, but as I said before, the season still has a bit to go and we still have it all to do."