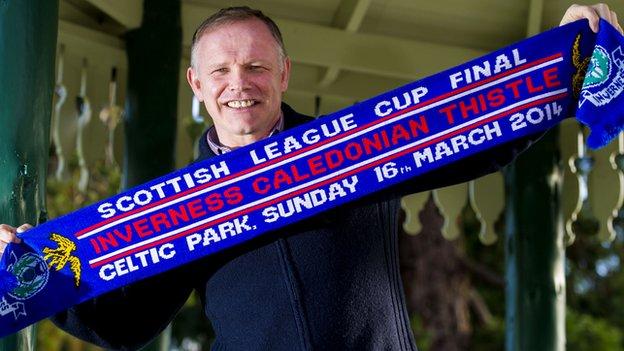 Aberdeen go into Sunday's League Cup showpiece as favourites but Hughes is asking his players to give their all while keeping cool heads.

"I can only pass on my experience, being there as a player and a manager - play the game, don't get caught up in the occasion.

"Control your emotions and don't leave anything on the pitch."

Hughes has played in a League Cup final for Ayr United and led Falkirk to the Scottish Cup final as manager, both ending in defeats against Rangers.

Route to the final

His assistant Russell Latapy played against Hughes in that 4-0 victory and the pair will look to calm the Caley Thistle players ahead of the clash at Celtic Park.

"It's my job as a manager to use all that experience, and Russell, put it in there, keep them cool, calm and collected, and the biggest message is have no regrets, leave nothing on the pitch," added Hughes.

"Even after an hour if you have run the race, put your hand up and come off. That's the effort it's going to take.

"But you have to control your emotions. It's a wonderful day, it's there to be enjoyed, but you need to play the game.

"If you play the occasion, there's every chance you'll be a rabbit in the headlights."

Meanwhile, Highland Council is promising to honour the club with "civic recognition later in the year" whatever the result on Sunday.

Former Caley Thistle boss Terry Butcher had talked of his disappointment at the council not honouring his promotion-winning team in 2010.

And Inverness Provost Alex Graham said: "It would be a very fitting way for the club to mark 20 years... by winning its first major cup.

"The club have done the city and the Highlands proud in fighting their way to the final and no matter the outcome the council will wish to mark their achievement in a meaningful way."