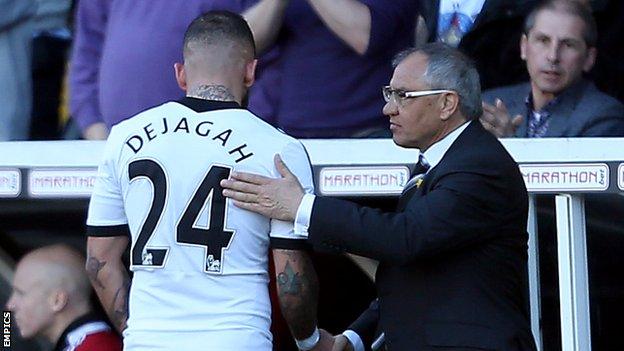 The win, courtesy of an Ashkan Dejagah goal, was the first in 10 top-flight games for the Cottagers, who remain four points from safety.

"I'm very glad and proud of my team," said Magath, who took over in February.

"It was hard work and now I think we realise that we are able to stay in the league."

Fulham's win was the first in four games since Magath took over and came after the German made five changes from the side which had been beaten 3-1 by Cardiff in their previous game.

Stockdale made two crucial saves, while Fulham kept their first clean sheet in the league since 8 December.

"I had to change something," said Magath, who had accused his players of complacency in the build up to the Newcastle match.

"You never know whether you are right or not but Heitinga played very well.

"If you have no results you have to change something. I told that to the players so I changed some positions and it worked.

"It was a first win since New Year's Day and we are now on the way and I'm very hopeful. Next week it will be a little bit difficult at Manchester City.

"I'm only thinking and working to stay in the league and I'm sure we can."

Fulham survived a penalty shout for a Heitinga handball from Tim Krul's shot after the Newcastle keeper had gone up for a corner in the final moments of the match.

"I had a nice, sensible conversation with referee Howard Webb and he explained his reasons to me and I accepted that," said Newcastle assistant manager John Carver.

"[Webb] said the position he was in he couldn't actually see it hit his arm.

"[But] sometimes when you're not quite sure you think 'let's end the game now'.

"Tim was a bit animated. He wanted to go to see him. I said no, get yourself out, don't go there. It's not worth it."