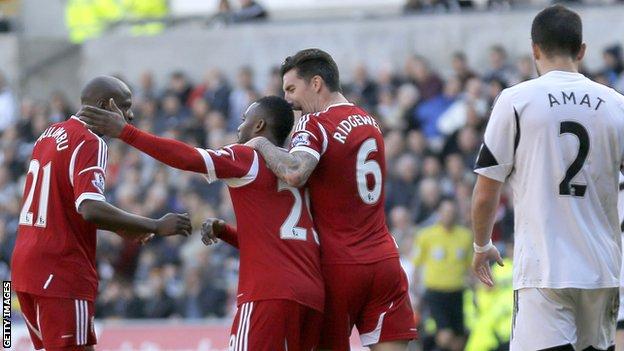 Swansea boss Garry Monk says his side have to battle harder to win points to ensure Premier League safety.

The Swans lost 2-1 at home to West Brom on Saturday after being ahead.

They are just four points above the bottom three and Monk hopes his players will learn from the defeat.

"West Brom were scrapping for their lives. I'm sure after seeing that second half our players will realise that's exactly what it's going to take," he said.

The Swans had targeted a win against the Baggies, who were only out of the relegation zone on goal difference before Saturday's match.

They took a second minute lead thanks to Roland Lamah's solo effort but failed to capitalise on their first-half dominance.

Pepe Mel's side improved after the break and Youssouf Mulumbu's late winner, after Stephane Sessegnon's equaliser, moved Albion to within a point of their Welsh hosts.

Swansea who are 14th in Premier League now face away trips to Everton and Arsenal in their next two matches.

The Swans have never beaten the Toffees in any competition and Monk acknowledged that his side are in a relegation dogfight.

"Of course we are," said Monk.

"We are in there. We have to show that fight and show better quality in our passing which is so important to us in the coming games.

"There's no easy game in this league. We are under no illusions how tough it will be.

One player well aware of the battle facing the Swans is the club's Welsh international full-back Ben Davies.

"We've got two tough games coming up now that we have really got to get something out of," he said.

"We've got to stand up now and be counted and really fight for every point that we can in this league."