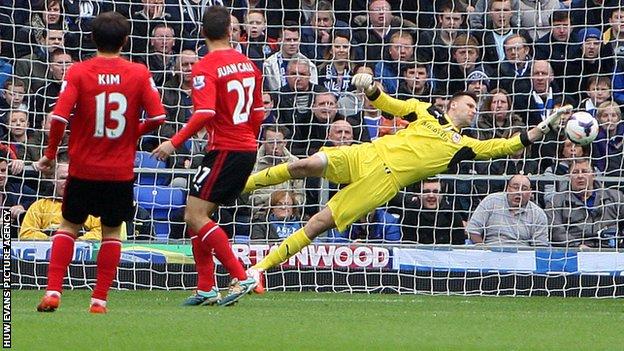 Goalkeeper David Marshall believes Cardiff City's Premier League destiny remains in their own hands despite the 2-1 defeat at Everton.

Ole Gunnar Solskjaer's side slip to 19th in the Premier League table, three points from safety and with eight games remaining.

"The confidence and belief is still there," Marshall said.

Ole Gunnar Solskjaer's side play title contenders Liverpool at home next on Saturday before travelling to relegation rivals West Brom on 29 March.

The Baggies are currently three points above the Bluebirds after a 2-1 win at Swansea on Saturday.

Marshall believes success in games like the one at the Hawthorns could be crucial to Cardiff's hopes of staying up.

"Don't get me wrong it's going to be tough because of the points we've got but we play the teams around us which is a big help," he said.

"I feel our destiny is still in our own hands if we get the points we need."

Marshall looked to have earned a draw with a string of saves after Juan Cala had equalised Gerard Deulofeu's deflected effort.

But the Scotland international was beaten for a second time in stoppage time by Coleman's miscued shot which earned Everton the win.

Marshall felt the result was harsh on Cardiff, who have only managed one win away from home in the Premier League this season.

"We put on a good 90-minute performance," said Marshall.

"We felt comfortable and towards the end of the game I thought we were going to nick it on the counter-attack.

"We played well which we can take into the next game but it's still disappointing to lose in that manner. We succumbed to an unlucky goal in the last minute.

"The first one's a tame shot that's comfortable and the second one he's obviously miss-hit which could have gone anywhere.

"The timing of the goal and the way the ball went in was a double blow.

"We need to pick ourselves up and get on with it."